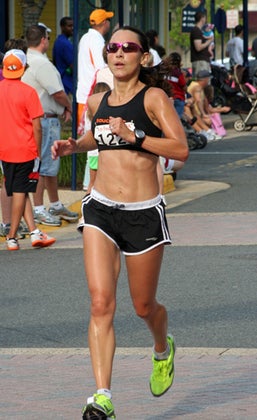 Back then I didn’t have a GPS watch—I’m not even sure I knew there was such a thing— but I had my trusty blue 10-lap watch and guesstimated every run. I started out using 11 minutes as my bench mark and then progressed to timing my run by 10 minute miles. If I ran for 60 minutes, I assumed I had run 6 miles. It didn’t matter how much walking I did because I hit stop when I stopped.

At first this method of running helped me. I would try to run for longer and longer before I had to walk and thus was able to increase the minutes and distance I could run.

I ran/walked my way to a sub 2-hour finish in my first half marathon.

Walking soon became a habit though and I was unable to separate out if I really needed to stop or if I just wanted to stop because that’s where I always stopped on my weekly routes.

I looked forward to those walk breaks and would pick up the pace to get to them faster, while knowing that I could push the pace because I was going to be stopping shortly. My runs became intervals. I actually ran very few runs from beginning to end.

When I decided in 2003 to train for and run my first marathon, I still was run/walking. It worked. Those 20 mile runs were hard but seemed more manageable if I knew that I could stop at mile 5, mile 10, mile 15 and on.

Eventually though, the method that was helping me complete the runs actually started to work against me. I noticed that in the later miles of the runs, when I most wanted to stop, that the more often I stopped, the harder is was to get back going, and the more often I felt the need to stop. There were runs where I would stop every .5 of the last 5 miles. I still was using my trusty 10-lap stop watch and hitting stop every time I stopped. When I looked back at my training log and saw how long it took me to run 20 miles, I wasn’t looking at the time it took to complete the 20 miles, I was looking at the time spent running during those 20 miles. I also had been walking forward during those “walk break” so the actual mileage of the “run” portion of the run wasn’t even 20 miles.

This gave me in inflated view of what I was capable of come race day. If memory serves me correctly I made it to mile 16 of my first marathon before I started to walk. By 20 I had hit the wall and hit it hard because I had no clue how to pace myself. I only knew how to run fast to get to a walking point. While yes, I made it to the finish line, it was more painful than it had to be and hands down one of the most painful races out of the 30 marathons I’ve run.

In 2006, three years after I ran my first marathon, I had my first child.

It was a huge event in my life and after much thought, I figured that I was in the perfect point in time to make large changes. I didn’t have to return to my old habits. I could create a different story for my running life, one that involved more running, less walking.

Instead of rushing to get to the point of my run where I would normally walk, I slowed down the pace consciously and ran on effort. I put forth the effort that was going to allow me to run the entire time. That meant that my pace slowed from what I had been running during the run portion on my pre-baby runs.

Only the slowing of my pace didn’t actually mean my run slowed down. I was no longer walking, my slow-to-me-running-pace, was actually faster than running fast and needing to walk to recover.

It also meant that my runs were no longer mostly interval runs. I was able to push harder on the hard days, while still running the entire time. Running harder on the hard days made it easier to run easy on the easy days because my legs literally didn’t want to move any faster. Walking became something I no longer had to do or really even wanted to do all that much.

Before my daughter turned one I found out I was again expecting. At the time I had been training for my first marathon post-baby. While I was sad to miss out on the marathon, I knew that the work that I had put in would still pay off in the future—that eventually my new way of running was going to help me improve my times.

RELATED: Yes, Walking Is A Good Workout—Here Are 4 Reasons Why

Six months after my second child was born I took my marathon PR from a 3:59 to a 3:36 qualifying me for Boston for the first time.

I’ve stuck with this change ever since.

Run/walking will get you to the finish line no question about it. If however, your goal is to get to the finish line faster, work on running continuously on your runs—especially the long runs—so you can run the entire 26.2 distance on race day.

It worked for me. It may work for you!