Exercise is one of the keys to preventing heart disease, the number one killer of both men and women in the United States. However, a Cleveland Clinic survey shows only 20 percent of Americans know how much exercise is recommended for a healthy heart. The survey also showed 40 percent of Americans are exercising less than that recommended amount—only about 2.5 hours per week of moderate aerobic exercise. The survey was conducted as part of Cleveland Clinic’s “Love Your Heart” consumer education campaign in celebration of American Heart Month.

Most commonly, people cited work obligations as the biggest factor preventing them from exercising more, followed by being too tired and obligations with family and friends. The survey found that men are considerably less likely than women to let things get in the way of their exercise routine, with more than one-quarter of them saying nothing prevents them from exercising.

Related: These Numbers Matter More Than Any PR

“While heart patients should certainly consult with their doctor before beginning a new program, they should be more worried about the effects of not exercising on their heart than exercising,” said Steve Nissen, M.D., chairman of Cardiovascular Medicine at Cleveland Clinic. “Nearly all people with heart disease, and without, should exercise. It improves blood flow, leads to lower blood pressure and will help you live longer.” 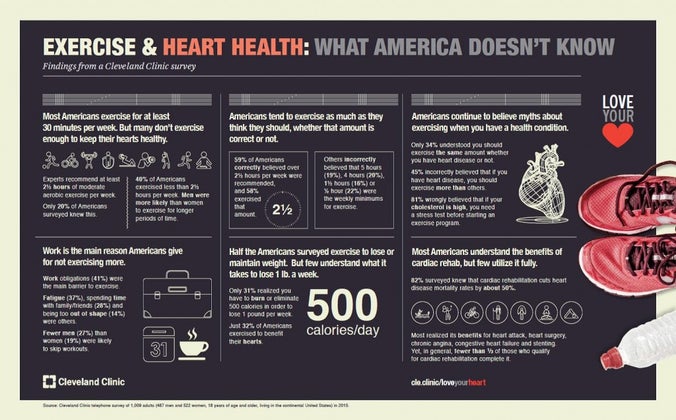 “Heart disease kills about one in four Americans, but many of these deaths could be prevented by simple lifestyle changes like exercising and improving diet,” Dr. Nissen said. “Americans know exercise is important, but most don’t realize just how far a little exercise can go—potentially reducing the risk of dying from heart disease by as much as 40 to 50 percent. It’s worth making time for it.”