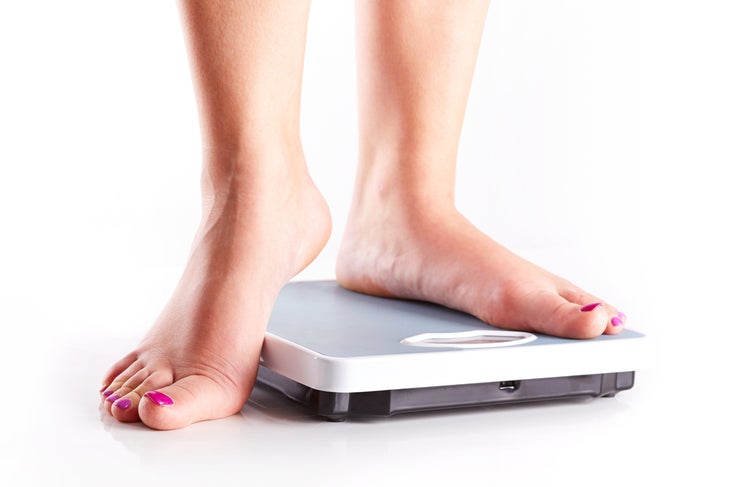 Are you obsessed with what the scale says? More and more we are learning that the number that pops up when you step on that platform is not telling the whole story when it comes to your body and your health.

Many women start running to lose weight or think that losing weight will make them a faster runner. In hopes to see the scale go down, working toward a magical number, they start a restricted diet. By doing this, the scale may go down, but most likely muscle will be lost in the process.

Being lighter doesn’t always equal faster. Losing muscle usually results in becoming weaker, having less power and being slower. Not only that, but by focusing on weight loss, you’ll usually end up looking like a smaller version of the same body, instead of achieving a fitter self.

Judgment Days
If you are trying to get in better shape, looking in the mirror isn’t an effective form of feedback either. Instead of noticing progress, many women see a distorted view of themselves, focusing in on the areas they don’t like.

When it comes to tracking results, many women only turn to the scale. They will let a small, metal, inanimate object make or break their day. The scale should never be your only tracking device. In most cases, it shouldn’t even be considered when working toward building a strong, athletic runner’s body—and here’s why:

A study published in the International Journal of Obesity and Related Metabolic Disorders showed the long-term effects of a very low-calorie diet. When 27 people followed a very restricted meal plan, they lost an average of 19 pounds in eight weeks, which is 2.38 pounds a week. But here is the kicker: For every 13 pounds of fat they lost, they lost 6 pounds of muscle! Of the 19 pounds lost, 32 percent was the stuff that’s great for a strong body. Sure the scale showed a lower number, but they had withered away lean muscle, becoming weaker and decreasing their metabolism.

Body Breakdown
The average woman is made up of about:

After an eight-week, very-low-calorie diet (similar to the study mentioned), a formerly 150-pound woman would lose woman would lose 19 pounds and weigh 131 pounds, with 46.5 pounds muscle and 29 pounds fat.

As she comes off the low-calorie diet, she would most likely gain the weight back as all fat, putting her back to where she started at 150 pounds but now with 46.5 pounds muscle and 48 pounds fat.

Study of Success
On the other hand, a research report at the Mayo Clinic in 2011 divided 54 women into 4 groups:

The women who exercised and did not lose weight lost the same amount of fat as the diet group who lost weight. The difference? The exercise group had added lean muscle, meaning they were also more fit and stronger at the end of the study. The conclusion was that exercise without weight loss is associated with substantial reduction in total and abdominal obesity—further proof that the scale does not have to go down for you to become more healthy.

By focusing on building power-generating muscle for running (instead of your weight), you will not only improve your speed—but you will also decrease your risk of injuries. Every step you take running, you’ll have the strength to support your joints for miles.

Weighty Advice
Another consideration when it comes to watching the scale is the fact that women reach peak bone mass around the age of 35. Since women are at a high risk for osteoporosis and osteopenia, increased bone mass is a good thing.

Weight-bearing activities, such as running and weight training, help to increase this—which is why putting pressure on yourself to weigh what you did in high school makes absolutely no sense. If you are in your 30s, your body is made up of more bone and hopefully more muscle, so you will not weigh the same.

All this is to say: Throw out the scale! Using your weight is outdated when it comes to measurements of whether your body is changing and if you are healthy. As a society, we need to start approaching exercise, diet and body changes differently and take the emphasis off of what we weigh and instead put the focus on getting fit. This means increasing strength and metabolism and decreasing the risk of diseases including obesity-related ones. How do you do this? By building muscle and losing fat, changing the ratio of what your body is made up of.

Start approaching your fitness and nutrition with the goal of completely reinventing your body to get a healthy body composition and stop looking down for a “perfect” number.