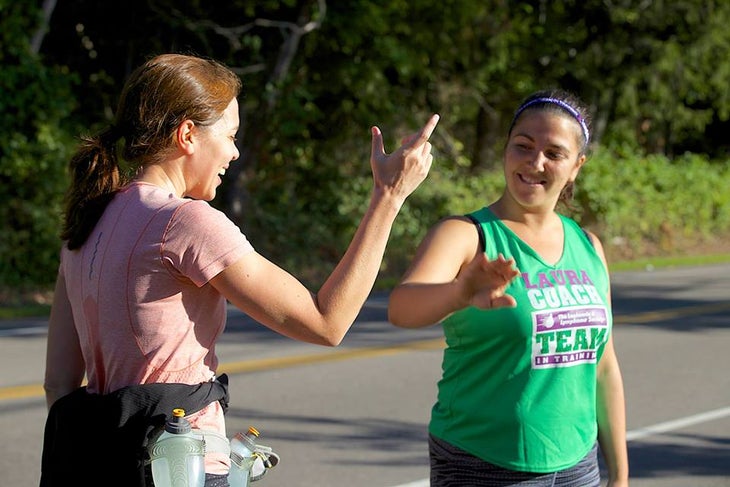 First, let me take this story back a couple of years to give you the whole picture.

I had a very busy race season in the fall 2013. I coached runners for three of the major fall marathons and followed it up with a PR at the 2013 Philadelphia Marathon. Rather than following the advice I give all of my runners, I did not take a recovery period after Philly. By the time I was toeing the starting line for the Boston Marathon the following spring, I’d gained almost 20 pounds despite an excellent diet, my wrist bones hurt and had this funky softness, I was exhausted and felt sick, and I ran the race AN HOUR slower than my PR at Philly just 5 months prior.

I knew I was experiencing the effects of overtraining. It had caused me to gain weight in the past, but never this much weight. Plus, I felt awful. By fall 2014 I thought, Maybe this move from Florida to Boston has caused me to suffer from low Vitamin D. I started supplementing, which helped a little bit; my wrists improved. But after a month I started experiencing heart palpitations and immediately stopped all supplements. My gut was telling me something was very wrong, so I finally made an appointment to see my doctor.

Related: How To Get The Most Out Of Your Fitness App

To her, my symptoms sounded like they might be thyroid related. She ordered a round of tests, which cost me about $800 out of pocket after insurance. Following up with a phone call, she happily let me know: “You’re cholesterol is a little high, which is unusual for a runner and healthy eater, but otherwise you’re fine!”

After an unimpressive doctor review, I decided to check out Insidetracker.com, which offers ultra personalized nutrition and lifestyle guidance for athletes, and their “ultimate” blood test package. I was a woman on a mission and I wanted all the info I could get. My test wasn’t scheduled until December, so in the meantime, I was able to enter my test results from my doctor into their system.

I immediately discovered that I was, in fact, not fine. I could see that my calcium was high, but knowing only the basics about calcium, I assumed this was related to the vitamin D supplements I’d been taking; my D levels were borderline high as well. I stopped the supplements, and within one month,  levels dropped drastically. However, calcium was still high; Inside Tracker notified me by email that the level was “at risk” and to contact my doctor.

I didn’t. I should have, but I didn’t. I thought, If high calcium was a problem, my doctor would have said something after my first test. She didn’t, so it must not be a big deal. I chalked up the weight gain to overtraining and started loading up on the teff, spirulina, lentils, spinach and salmon to try to improve my iron and cholesterol. By July 2015 I still felt like crap, my athletic performance was crap, but now I could add a marked lack of focus and restless sleep to my list of symptoms. After trying another test, I could see improvements in many areas, but my vitamin D had plummeted below optimal and my calcium was higher than ever. That email still came to my inbox: Call your doctor.

Related: What To Look For When Choosing A Doctor

This time I listened. I called my doctor and asked for a referral to an endocrinologist. I suspected my test results were telling me that I had hyperparathyroidism due to benign tumors, and after two more blood tests to confirm, she agreed. Since that time, I’ve been working with my endocrinologist and surgeon to create a plan that will be right for me to address these tumors. This left me feeling a little bit helpless with regard to what I could do to help myself feel better. My athletic goals shifted, certainly. The new goal was to just keep moving, even if it feels difficult.

Six months later I tried a new high-performance test to see what I health-related issues were in my control. This brings me to my ferritin. I’d been trying to address this through nutrition alone for more than a year at this point, which showed zero progress. Not surprising for a female, pre-menopausal runner. However, this is something I CAN improve with iron supplements. I know it won’t make exercise feel any easier until after my surgery, but even a little improvement at this point will feel like a huge win. Inside Tracker allowed me to be an active part of that process and to come to the table with information for my doctors to discuss. It also allows me to focus on things that are in my control and take action.

4 Fitness Trends That Might Not Do You Any Good