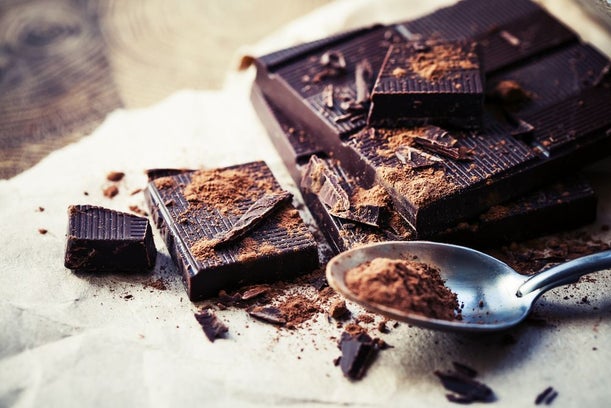 Someone recently told me that “a spoonful of apple cider vinegar a day keeps the doctor away.” I politely nodded and smiled, thinking the statement was complete nonsense. Apple cider vinegar is one of those foods that has been deemed a “superfood” without much research to back up the claim. Foods like these gain popularity for mostly anecdotal reasons. That’s not to say there aren’t some health benefits to these “superfoods,” but they certainly aren’t miracle cure-alls. I asked some fellow dietitians which “superfoods” their clients love that aren’t actually superfoods at all. Here’s what they had to say.

Some research shows the health benefits of vinegar, but most of these studies have been performed on people with diabetes. One study suggests that ingesting 2 tablespoons of apple cider vinegar at bedtime may help regulate waking blood sugar in people with type 2 diabetes. The acetic acid in vinegar reduces the digestion of starch and helps foods sit in the stomach longer, making you feel fuller for a longer amount of time. However, researchers noted that this result was not exclusive to apple cider vinegar. In other words, the same thing will happen if you drink red wine or balsamic vinegar. For apple cider vinegar lovers who swear by the toxin clearing effects of unpasteurized “mother” apple cider vinegar: I hate to break it to you, but there’s no research to support these claims. Your body does a great job clearing out its own toxins with a really useful tool–it’s called the liver.

“I have several athletes who feel honey and sugar aren’t the same thing,” said Sports Dietitian Angie Asche, MS, RD, LMNT. Some of her clients indulge in a tablespoon of raw honey each day to help with their seasonal allergies, and there’s no real evidence to prove that this helps. “I would definitely recommend runners utilize honey as a source of quick acting fuel, but don’t assume you’re going to have a huge boost to your immune system and conquer all your allergy problems,” says Asche. Registered Dietitian Lauren Harris-Pincus, MS, RDN  added, “Honey is high in fructose, so anyone with IBS or [who needs] to follow a low FODMAP diet may find that it causes tummy distress.”

“I get a lot of questions about pink Himalayan salt from my clients looking to lower blood pressure or eat heart healthy,” said Registered Dietitian Denine Marie, MPH, RDN. For those unfamiliar with pink Himalayan sea salt, it’s mined from the Himalayan mountains and has trace amounts of magnesium, potassium and calcium. However, it still contains 98 percent sodium chloride (salt). Many people believe Himalayan sea salt has less sodium, but it’s not much different from regular old table salt. “It is a very trendy superfood with a high price tag, yet the claims are misleading for people interested in reducing sodium intake or boosting nutrition,” Denine said. She recommends skipping the designer salts and spending money on fresh fruit and veggies instead.

The oil from this tropical fruit has become a staple for many that follow trend diets. Its popularity is due to one of the fats it contains, called medium chain triglyceride (MCT). This type of fat tends to be used for energy rather than storage. But only about 15 percent of the fat in coconut oil is comprised of MCTs; all the rest is unsaturated fat. Many studies have shown that, when unsaturated fats are replaced with saturated fats, this can lead to heart disease and raise LDL (“bad”) cholesterol. That being said, it comes as no surprise that the American Heart Association recently published a paper that bluntly declares, “We advise against the use of coconut oil.” However, there’s nothing wrong with ingesting some saturated fat in moderation. Still, a daily diet that includes ingesting coconut oil at multiple meals may have negative health impacts.

Don’t hate me for this one; I love dark chocolate just as much as the next runner. But here’s the thing–dark chocolate has two things in it that make it taste really good: sugar and fat. Pure dark chocolate tastes like chalk. Literally. Out of all the items on this list, dark chocolate probably has the most research promoting its health benefits. It’s rich in flavanols, and studies have shown that people with high flavonoid blood levels have a lower risk of developing heart disease, lung cancer, prostate cancer, asthma and type 2 diabetes. So what’s the catch? The recommended serving size for a piece of dark chocolate is 1 ounce, which is usually only about 1/3 of a bar. That single ounce of chocolate also has about 12 grams of sugar and 10 grams of fat. Anyone who thinks they can get their antioxidants from dark chocolate instead of fruits and vegetables is sadly mistaken. Not only do fruits and veggies have antioxidants, they’re also packed with vitamins and minerals and are much lower in calories. All in all, dark chocolate definitely has its benefits, but it’s best to keep it as a once in a while treat, rather than an everyday “superfood.”

The Top 5 Superfoods People Are Obsessing About

Apple Cinnamon Granola With Superfood Will Be Your New Favorite Snack

Yes, You Can Make Muscle With Plant Protein

The Science Behind the Turmeric Hype

What to Eat When You’re On Your Period