Unlock this article and bundle up with Outside+.

That’s because even for the best professional runners, food is more than simply fuel. It’s not just the gas that keeps their engine running. “Food is way more than fuel,” says Stephanie Howe Violett, 2013 Western States 100 champion with a Ph.D. in nutrition and exercise science. “It’s important to be connected to what we eat because it builds a positive relationship with food and eating. When we are connected in the process from food to preparing to eating, it’s beautiful.”

It’s a mentality some experts have referred to in the last decade as a shift from a “food as health” paradigm to “food as well-being.” That yes, eating healthy and focusing on key nutrients is important, but the mindset and the “why” behind how and what you eat is just as critical. “This requires shifting from an emphasis on restraint and restrictions to a more positive, holistic understanding of the role of food in overall well-being,” researchers wrote in a paper published in Journal of Public Policy & Marketing. They defined “food well-being” as a positive psychological, physical, emotional, and social relationship with food at both individual and societal levels.

Follow these four simple rules to help raise the joy of your everyday cooking and eating. Bon appétit!

Over the years, cooking is something that Flagstaff-based trail runner Christine Bauer has found greater and greater joy in. “Food brings people together,” Bauer says. “My mother always cooked dinner for us, and we sat and ate a meal together every night. This example led me to value this seemingly simple gift and cascading connection and conversation that came with it. Over campfires, with friends or alone in my own kitchen, I like the physical nature of creating a meal to show love and care.”

Elite runner Aisha Praught Leer has found a similar connection. “When I moved to Eugene [Oregon] as a first year pro, I was so far from my family or anyone I knew. We all were. A few of us started a tradition of eating meals together on Sunday evenings, which is how I learned to cook a British Sunday roast,” she says. “As an athlete, food is obviously super important as fuel, but sitting around a table, putting phones down, and sharing a meal is true community to me. Cooking for others has evolved into the biggest way I show love.”

Bauer and her husband, professional ultra-runner Rob Krar, hosted their first running camp in the summer of 2015. Each camp offers guided trail runs over a variety of terrains, distances and altitudes; it also offers a lot of home cooking by Bauer.

“When we began hosting trail running camps I naturally fell into a cooking role prepping two dinners and daily picnic lunches. There is something about sharing a home-cooked meal that facilitates strangers becoming friends, so it seemed only right that we would welcome participants into our home the first evening to eat together,” she says. “The first evening of camp I make a taco bar with a little something for everyone: Stout-braised chipotle tempeh and roasted portobello mushrooms are my mainstays, and are often accompanied by spicy roasted beets or sweet potatoes—and all the toppings, including my favorite cool and refreshing yogurt-lime-cilantro sauce.”

Along with others from their Flagstaff running community, these gatherings can swell close to 40 people, “spilling outside and spreading over our living and dining room area.” But they are by far some of the most memorable meals to Bauer.

There is an absolute link between ambiance and enjoyment of a meal, says Howe. “I think the presentation, both of the food and environment, is an important part of enjoying food. The best meal served in front of a TV doesn’t compare to a simple plate of food enjoyed out in the mountains or artfully presented. But it doesn’t have to be an epic landscape,” she says. “A simple picnic in the backyard or at the park can be just as enjoyable. Same as setting the table at home and lighting a candle. These are ways to build enjoyment around enjoying food.”

“From a young age my mom introduced my sister and I to playing in the kitchen. I love getting my hands dirty and preparing foods,” says Howe. Here are two of her favorite simple, feel-good dishes. 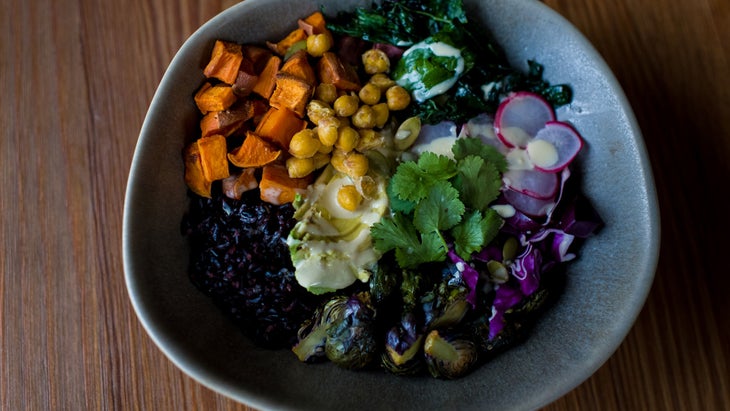 “This is something I made every week. It’s a ritual of sorts for me, usually on Sunday or Monday night. I like to prep a bunch of veggies for the week ahead.”

Add greens and grains to bowl, top with the remaining ingredients and Lemon-Tahini Dressing. (For the dressing, mix all ingredients in a small jar and shake to combine. Store in the fridge for up to one week.) 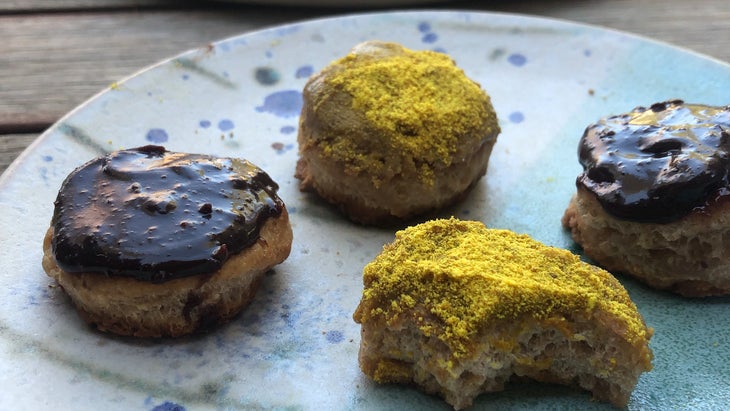 “I went out for a long run, bonked hard, and thought about donuts the whole way back. So naturally, I had to make my own.”

Mix dry ingredients together and set aside. Whisk egg, buttermilk, and vanilla together. Stir in melted butter. Add to dry ingredients and stir to combine. Bake at 350F for 12-13 minutes. (I used a muffin tin, but if you have a donut pan rock on!) After baking, remove and allow to cool. Cut out donut holes (if you want the donut shape). Add 1-2 tablespoons of coconut oil to a frying pan. Pan-fry donuts one at a time, about 1m minute on each side. Add more coconut oil as needed. Top with chocolate.