What separates a fast marathoner from a middle-of-the-pack or slow marathoner? One element, according to a highly publicized 2020 study in the journal Nutrition, is macronutrient and mineral intake. In particular, marathon runners who consumed adequate amounts of unsaturated fat, iron, potassium, and magnesium had better race-day performances and better cardiovascular health.

You might be well aware of how much fat, iron, and potassium (hello, bananas) are in your diet, but when was the last time you thought about magnesium? Turns out that little mineral plays a big role in the form of electrolytes.

You might be used to paying attention to your sweat and how to replace the lost sodium after a sweaty workout. However there are other electrolytes that we lose through sweat, like potassium, magnesium, and chloride. Magnesium tends to fly under the radar as a mineral and electrolyte. Yet it plays a crucial role in many processes that translate to athletic health, including energy balance and metabolism, oxygen and electrolyte uptake, and helping to decrease muscle cramping. It’s also very important for heart health.

Here’s what you need to know about magnesium and how to get it into your diet.

Are You Consuming Enough Magnesium?

Aside from the role it plays in many muscular processes, strenuous exercise also increases sweat and urinary magnesium losses, meaning the need for it increases (by as much as 10 to 20 percent) as physical activity levels increase. Even a marginal deficiency in magnesium may impair performance and amplify the effects of oxidative stress on the body. There is also some evidence that magnesium deficiency is related to factors that promote migraine headaches, but according to the National Institutes of Health, there is only limited research behind using magnesium supplementation to prevent those headaches.

The female adult daily recommendation for magnesium according to the National Institutes of Health is between 310 and 320 milligrams per day (with increased needs during pregnancy), while adult males are recommended to consume between 400 and 420mg per day. However, athletes may have a higher risk of deficiency than non-athletes. Some research, like this 2006 study by Forrest H. Nielsen and Henry C. Lukaski, shows that consuming less than 220mg per day (for women) and 260mg per day (for men) may result in a deficient status. 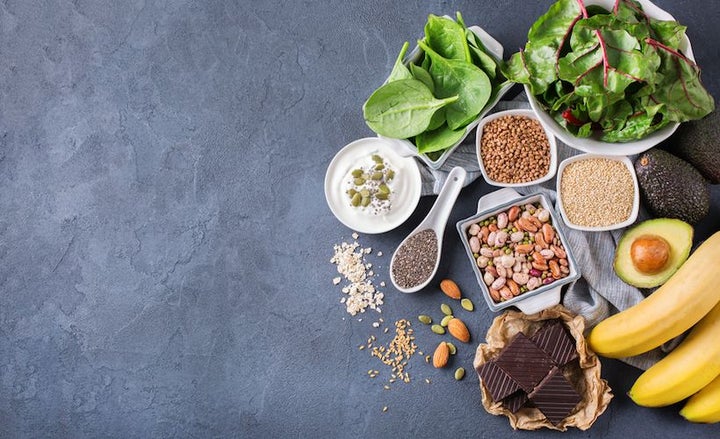 While it is possible to get adequate amounts through food, this requires eating a nutrient-dense, balanced diet. Magnesium is widely distributed in plant and animal foods and is typically found in foods with higher fiber content. The best food sources include:

Do You Need a Magnesium Supplement?

Like other minerals, magnesium is also available in supplemental form if individuals can’t meet the adequate intake through diet alone. While supplementation may be beneficial for those who are already deficient, taking supplements has not been shown to consistently enhance physical performance in those with adequate levels. There is a need for additional research on this topic, as some studies have seen athletic performance benefits and increased muscle strength in those who needed supplementation and received it while other studies have found no consistent results from test subjects taking supplements.

One study published in the International Journal of Sport Nutrition tested the effects of 365 milligrams of magnesium supplementation on marathon runners who were not magnesium deficient. Compared to the placebo group that received no supplementation, the athletes that did receive supplementation did not see increases in either blood or muscle magnesium levels. The researchers therefore found no measurable effects on marathon running performance, the extent or rate of muscle damage or the ability of muscles to recover after exercise. This is likely due to the fact that the runners were replete at the start of the study.

The bottom line: Unless you are clinically deficient, it appears that supplemental magnesium is not necessary. It may be more prudent to focus on dietary intake through magnesium-rich foods. After all, most of the dietary sources of magnesium are healthy, nutrient-dense foods that also provide a necessary balance of macronutrients, micronutrients, and antioxidants, which can help with pre- and post-exercise fueling. Nevertheless, don’t forget about the importance of magnesium as you consider your pre- and post-race nutrition plan.

Sarah Schlichter is a registered dietitian and marathon runner based in Charlotte, N.C. She works as a nutrition consultant and in private practice, where she writes the blog, Bucket List Tummy, sharing nutrition posts, healthy recipes, running tips and everything on her bucket list.