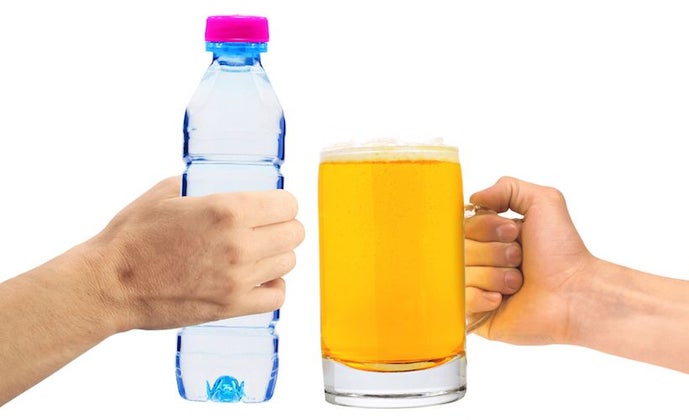 “Only 13.1 more miles until beer.” “The faster you run, the sooner you’ll have a drink in your hand.” Seeing a sign with one of these sayings is almost inevitable during a New York City race. Not all runners finish their races with a beer in hand, but many revel in the thought of easing their muscle pain with an adult beverage. But what does that drink actually do to your body? Don’t worry—it’s not all bad. We spoke with two registered dietitians to better understand the science behind that post-run beer or cocktail.

How does a post-run alcoholic drink affect your body?

“If alcohol is the first thing you put in your body after a run, its diuretic effect will be much greater than drinking without having engaged in a depleting exercise,” says sports dietitian Kelly Jones, M.S., R.D., C.S.S.D., L.D.N. In other words, alcohol pulls water and salt out of the body, causing further dehydration. Jones notes that even runners who do their best to meet their fluid and fueling needs may still end their run depleted.

“If you’re dehydrated after a run or race, drinks with large amounts of alcohol are going to exacerbate that,” says Chrissy Carroll, M.P.H., R.D., L.D.N., ACSM-cPT, USAT Level I Triathlon Coach. If you have a heavy training schedule, that dehydration can affect tomorrow’s run, as well. “Jumping into your next training session when you’re already dehydrated is a recipe for reduced performance,” Carroll says.

“Excess alcohol is not only dehydrating, but it can increase inflammation, decrease muscle carbohydrate replenishment and impair muscle protein repair,” Jones adds. Even so, these dietitians argue that a post-run drink is acceptable—some of the time.

Do you think it’s okay to indulge in a post-run drink?

“Consuming alcohol in moderation after a race is fine, but I encourage runners to replenish their fluids and electrolytes with water and food first, especially for longer distances,” Jones says. While small amounts of occasional alcohol are unlikely to affect training, drinking every day will likely compromise your recovery and hinder your performance.

“Aside from the dehydrating effect, those post-run drinks may also be taking the place of important carb- and protein-rich food choices that your body needs after a tough workout,” Carroll says.

When is the best time for a runner to have a drink?

“My vote is for post-race, because you’ve just completed what you’ve been training for and likely don’t have another tough workout the next day,” Carroll says. “If you like to drink during training, choose to indulge when you know you’ll have enough time to adequately hydrate before your next run.” In other words: have a drink after your long run or on your rest day.

“If you plan to drink past moderation [moderation is considered to be one or two drinks per day for women and men, respectively], [doing so] on a rest day or the day after your longest run of the week is likely best to reduce the negative effects,” Jones says. Runners don’t need to abstain from alcohol entirely during training, but timing is everything.

Is It Okay To Enjoy The Post-Race Beer Garden?

The Biggest Running Trends Of The Current Decade

Should You Give Up Alcohol During Marathon Training?