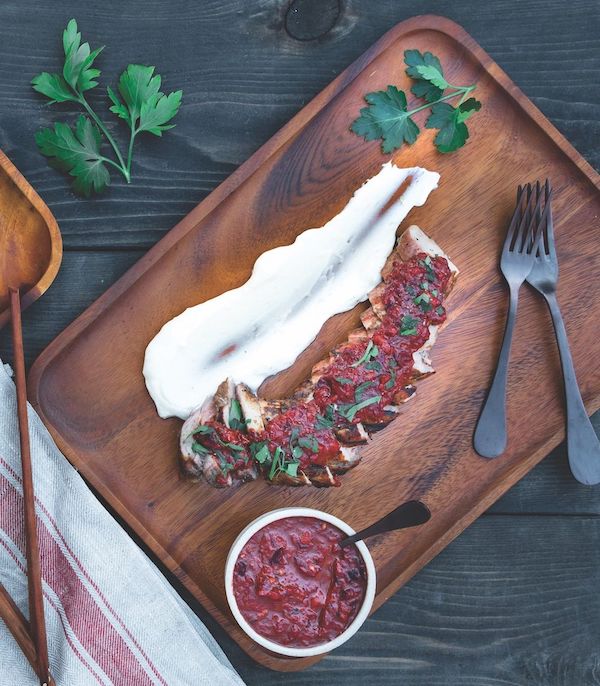 As part of his summer “Grill Thrills” series, Matthew Kadey offers a grilled pork recipe that features a savory plum sauce and a smorgasbord of spices to taste.

Pork is often overlooked when it comes time to fire up the grill, but it’s a lean protein that tends to resist drying out. The grilled plum sauce adds an exciting sweet-fiery component. When grilling, use slightly underripe stone fruit (like plums and peaches).

Build a medium-hot fire in a charcoal grill, or heat a gas grill to medium-high. Brush pork with oil and season with salt and pepper. Grill pork, turning a couple times, until an internal temperature of 145 degrees is reached, about 12 minutes. Set aside to rest for five minutes and then slice thinly. While pork rests, lightly brush plums with oil. Place on grate and heat until grill marks appear and plums become tender, about one to two minutes per side. Remove any charred skin from plums and place in a blender or food processor container along with olive oil, balsamic vinegar, garlic, thyme, chipotle pepper, cinnamon and a couple pinches salt; blend until slightly chunky. Stir together sour cream and lemon zest. To serve, spread sour cream on a serving platter and top with pork slices and plum sauce. Garnish with parsley or cilantro.

Create Some BBQ Envy With This Kabob Recipe

Weeknight Dinner Winners: The Thrill of the Grill