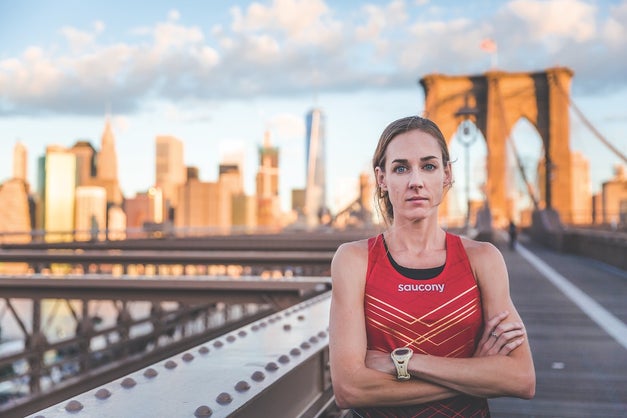 One of The Top U.S. Runners Learned To Love An Endurance Diet

For proof of the endurance diet’s power, look no further than Molly Huddle, one of America’s top distance runners. Huddle grew up in Elmira, N.Y., on what she described to me as “the typical American diet” of cereal for breakfast, sandwiches for lunch and meat and potatoes for dinner. This diet fueled Huddle to a fourth-place finish at the Foot Locker High School Cross Country Championship and a national high school record for 2 miles (10:01).

Related: Molly Huddle Made History At The United Airlines NYC Half Marathon

In college, Huddle ate like a typical college student. Her dietary mainstays were cold cereal with milk and bagels with peanut butter. Conscious of the need to consume vegetables, she ate salads “occasionally.” During her four years at the University of Notre Dame, Huddle made nine All-America selections and was a runner-up finisher in the 2006 NCAA Championships 5,000 meters.

After graduating from college, Huddle moved to Providence, R.I., to train with a group of elite female runners. Her professional career got off to a shaky start, and Huddle struggled initially to keep up with the women she trained with. No longer could she rely on her talent and work ethic alone. So Huddle decided to change her diet. She did not attempt a complete overhaul, but made a few common-sense adjustments, such as eating more salads and less breakfast cereal. In other words, she adopted the habit of eating quality food.

The most important change, however, concerned not what she ate but how much. A naturally light eater, Huddle noticed that the athletes around her ate more, so she began to “eat enough” as well. “It helped me to see that the women I was training with were eating full, carb-heavy meals and kicking my butt in races,” Huddle told me, “so I figured they were doing everything right!”

Her assumption was correct. Running and other endurance sports are so competitive at the elite level today that athletes cannot be successful—no matter how talented and hardworking they are—without doing everything right. Huddle’s decision to emulate the eating habits of the best athletes around her just made sense, and it was validated in the years that followed when she won 23 national championship titles and set four American records.

Eat Like An Elite With Help From This New Book

This Beef And Soba Noodle Recipe Brings Heat To Dinner

You’ll Go Nuts For This Fruits And Pecans Oatmeal