Many athletes are aware of the wonders of drinking chocolate milk after running as an effective (and delicious) recovery drink. High in carbs, protein, and fat, chocolate milk has been shown in many studies to improve markers of muscle recovery after exercise. Chocolate milk drinkers, in research settings, have also benefited from lower levels of lactic acid.

But in terms of rehydration, milk, with or without chocolate, might not be an obvious choice. But it turns out it’s actually one of the most rehydrating beverages of all: A new study, published in the International Journal of Sport Nutrition and Exercise Metabolism, found that low-fat milk was far more effective in rehydrating athletes after exercise than water.

The results surprised even the researchers, who originally thought that extending the amount of time the dehydrated athlete spent drinking either liquid (between 30 and 90 minutes post-exercise) would equal out the hydration levels,  by giving the body more time to absorb the fluid. But they found that time spent drinking had no significant effect.

Because of the nutritional content of milk (specifically protein), the emptying process through urination is slowed enough to allow for more liquid to be absorbed. Water on its own has no macronutrient content to slow down that process and increase absorption. However, water’s ability to rehydrate can be enhanced when it is paired with food.

“Ultimately, athletes should be aiming to replace their fluid losses from exercise,” says Dr. Chris Irwin, one of the researchers involved with the study. “This can easily be monitored by weighing yourself before and after exercise, then replacing the losses.” Dr. Irwin recommends athletes aim for replacing that loss with 150% the amount of fluid.

“The extra 50% accounts for the fact that there will be large fluid losses via urine when large amounts of fluid are consumed,” he says. However, if food is consumed at the same time, then urine losses are expected to be less and runners should aim for 100% fluid replacement, instead of 150%.

Another recent study published in the Journal of the International Society of Sports Nutrition found that skim milk was just as effective as sports drinks to hydrate endurance athletes before intense exercise. Since milk has a comparable amount of carbohydrates and sodium, it can be effective in reducing fluid loss during a run.

Within the study, the authors write that the “results may help athletes with different beverage preferences to increase their options of hydration strategies.” Which means you don’t have to drink milk to be a more efficient athlete who masters their hydration. It’s just one of many options beyond plain water. 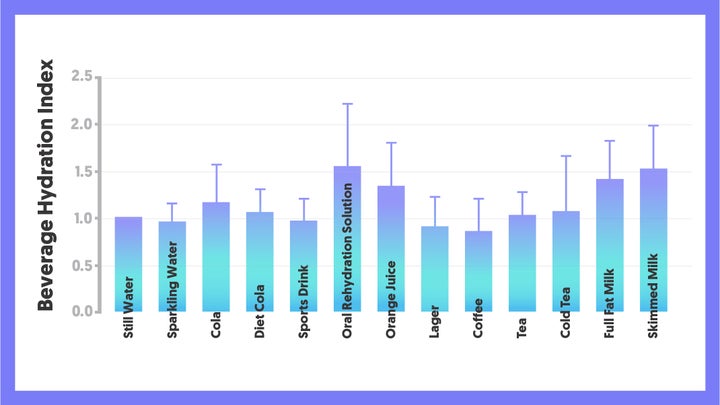 That’s one reason why scientists came up with the Beverage Hydration Index (BHI) several years back, to help people make informed choices about hydration.

Full-fat milk, skim milk, oral rehydration solutions (such as Pedialyte), and orange juice are among the top most hydrating in the BHI. Coffee, still water, and sparkling water are among the least hydrating. Dr. Irwin also notes that milk alternatives can be considered just as effective as cow’s milk due to their nutritional content.

So that just leaves us with one question: Got milk?