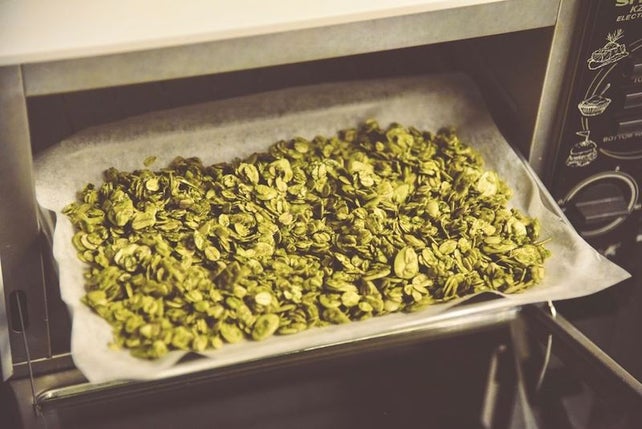 If this granola looks slightly green to you, there’s no need to adjust the color on your screen. That’s because it’s made with a secret ingredient: matcha. If you’ve never tried it before, matcha is a green tea powder that is loaded with antioxidants and a compound called ECGC, which has been shown to help speed up metabolism and increase the amount of calories you burn. ECGC is found in any form of green tea, but matcha may have up to 137 times more than other varieties.

Matcha also contains caffeine. An 8-ounce serving of matcha boiled in water has about 70 mg of caffeine, which is a bit less than coffee but more than other green teas. Many people actually claim that matcha makes them feel calm, despite its caffeine. They believe this soothing effect comes from something called L-theanine, though this has never been proven.

Matcha has a slightly earthier flavor than other green teas, and adding it to a granola mixture will give you a nice caffeine boost before a run. If you can’t find matcha at your local supermarket, you can also make this recipe with green tea leaves. Either way, it will be delicious.

Preheat oven to 250 degrees Fahrenheit. In a large bowl, combine the oats, matcha, brown sugar, maple syrup and oil. Stir until well combined (you may need to use your hands). Coat a baking sheet with cooking spray. Lay the granola mixture on the baking sheet and spread evenly. Bake for 50-60 minutes or until golden brown.

Why Tea Is The Better Caffeine Choice For Runners

Try This Caffeine Alternative To Get Your Energy Boost

This Coffee Crunch Smoothie Is An Instant Energy Boost