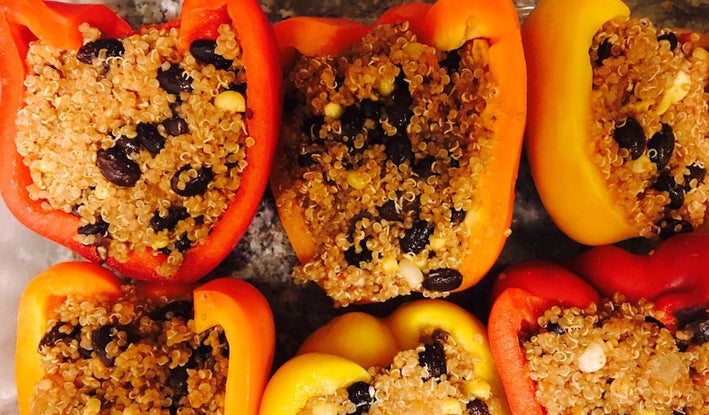 Meet our new blogger, Stephanie Hoppe, of We Run the World!

It was a lazy Sunday afternoon in June. We had just finished our long runs, and my husband, Matt, plopped down on the couch, excited to relax. He turned on our TV and did a quick search of “New on Netflix” that yielded What the Health.

“Hey honey, I think you should come watch this,” he beckoned to me. I sat beside him as the documentary began, not anticipating how much this one film would affect our lives. After less than 30 minutes, Matt turned to me and made one of his famous declarations: “I’m done with dairy! I think we should be vegan.”

Related: 8 Things I Never Expected Would Happen During My First Week Going Vegan

What you might be thinking was so powerful about this documentary that had my cheese, ice cream and yogurt-loving husband making a vow of this magnitude? The documentary highlighted the scary health implications (i.e. heart disease, diabetes and cancer) of eating meat, dairy and animal byproducts. While some of the assertions seemed a bit extreme (i.e. that “eating an egg a day is as bad as smoking five cigarettes”), the film did highlight some rather salient points. Most notably, it left Matt completely perplexed as to why humans consume milk from another animal. It left me eager to make food choices that would be healthier for my body, more environmentally sustainable and not harmful to animals. And finally, we were both excited to see how this healthier lifestyle might improve our running. As the end credits scrolled onto the screen, we were resolved. We were vegan…well, vegan-ish.

Here are the top 10 lessons we’ve learned during our first month of plant-based fueling.

Matt and I decided that if we wanted veganism to be a sustainable lifestyle change, we weren’t going to hold ourselves to a strict “all or nothing” vegan diet. If a recipe called for eggs or butter, we could use eggs or butter. If we wanted to eat a piece of cheese, we could eat a piece of cheese. And if we wanted to indulge in a scoop of ice cream, we could do just that! We didn’t want to set ourselves up for failure by absolutely forbidding all non-vegan foods. We worried that might cause us to binge on non-vegan foods during “cheats.” We’ve learned that if we don’t entirely restrict ourselves from certain foods, when an opportunity arises to eat a piece of cheese or a scoop of ice cream, we often choose not to! We’ve also found that cooking without eggs and butter is not as challenging as it would seem.

Some cheats are just not worth it.

During a recent weekend trip, Matt and I ate breakfast at our Hilton hotel. I chose my normal hotel breakfast: a made-to-order omelet stuffed with cheese, ham, tons of veggies and salsa on the side. A few bites in, I called it quits. It had been weeks since I had eaten eggs, and the omelet wasn’t as good as I remembered. I decided then and there that if I’m going to cheat, it’s going to be worthwhile! Matt and I drove directly from our hotel to Duck Donuts and got made-to-order donuts instead. And BOY, was that cheat WORTH IT!

Vegan does NOT always equate to healthy.

We realized very early on that we could still be eating unhealthily, even if we were eating vegan. Case in point: Oreos, Nutter Butters, pudding, Ben and Jerry’s vegan ice cream. (Yes. That’s a thing!)

After much experimentation, we’ve discovered that So Delicious cashew milk is our favorite. We highly recommend Snickerdoodle and Salted Caramel Cluster with a dollop of So Delicious vegan Coco Whip. The coconut milk-based varieties were a little too icy for our liking.

For the most part, we haven’t missed not eating dairy, eggs or meat. We still occasionally indulge in non-vegan foods, but 95 percent of the time, all of the foods we eat are vegan friendly. It’s also important to note that we did not eat very much meat before, so cutting that out was not a major adjustment for us.

Our bodies did not adjust quite as quickly.

During our second week of being vegan, there was one day that I was feeling dizzy, weak and lethargic. After a quick Google search of my symptoms (and a few minutes of being utterly convinced by WebMD that I was definitely on my death bed), I realized that I wasn’t getting enough protein. In that moment, I questioned whether veganism was a good idea. I hadn’t felt like this before, so maybe I should return to my non-vegan ways. I talked myself off that ledge and instead decided to actively increase my protein intake. I started tracking everything I ate, paying careful attention to protein. I discovered food trends and found ways to sneak more protein into my diet: thank you, edamame!

Veganism can be hard.

During holidays, birthdays, special occasions and while traveling, it is much harder to be vegan. At the beginning of July, during a single week my parents came to visit, one of Matt’s friends came to visit, it was the 4th of July and we traveled to New York City twice to celebrate my mom’s and Matt’s birthdays. Needless to say, we “cheated” more than a few times during that week. And you know what? We were more than okay with that. We decided that, in certain situations, it is more important to enjoy life’s moments than stress over being entirely vegan. I would have regretted not grilling with my dad on the 4th of July and not celebrating Matt’s birthday with ridiculously indulgent milkshakes from Black Tap in NYC.

In our first few weeks as vegans, we ate sweet potatoes with almost every meal. We had sweet potato cookies for breakfast, sweet potato black bean burgers for lunch and sweet potato gnocchi for dinner. It was sweet potato overload! Knowing that we needed variety, I sought out vegan cookbooks, reached out to fellow vegan friends (thanks, Maggie!) and read online blogs for additional inspiration. We’ve since discovered many vegan recipes that we LOVE and that do not include sweet potatoes. One of our favorites is a black bean, pepper and onion taco recipe, complete with homemade mango guacamole.

Matt and I thrive when we are having fun together. We have a knack for being able to turn the most mundane tasks, such as grocery shopping and cleaning, into fun adventures. We brought that sense of excitement to veganism, and we have done our best to make this lifestyle change an enjoyable one. Our most exciting discovery was squash noodles, which I’ve affectionately dubbed “Squoodles.” If you have yet to discover the world of spiralizing vegetables to make “noodles,” you must! Besides producing an incredibly healthy meal, using a spiralizer is SO much fun!

Treat veganism as a journey.

Becoming vegan is a process that doesn’t happen overnight. We decided that taking baby steps to becoming vegan is the most sustainable approach for us. We might never be 100 percent vegan, and we are okay with that. For now, vegan-ish is working quite well. We both feel stronger and more adequately fueled during our daily runs and workouts. We suspect that our new plant-based fueling regime is positively impacting our running performance. However, we are eager to put our theory to the test during our next big race, the REVEL Big Cottonwood in Salt Lake City on Sept. 9. Be sure to check out my race recap and lesson learned after the race!

How This Ultrarunner Fuels Her Body On A Vegan Diet

6 Easy Recipes That Will Help Heal Your Gut

You Can Eat Healthy and Avoid Food Waste—Here’s How

Yes, You Can Make Muscle With Plant Protein

The Science Behind the Turmeric Hype

4 Reasons to Eat an Avocado a Day