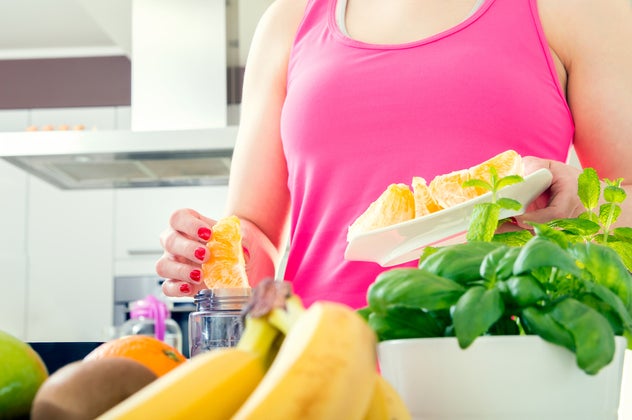 There’s a trend in the running and fitness realm and it’s a trend that has the potential to be quite harmful. It is the idea that we earn the right to indulge in our favorite foods based on the exercise we perform (like the idea that if you’ve run a marathon then you’ve earned that burger and brew). But what if it’s Monday night and you didn’t run at all and you still want a burger and a beer? Can you still eat it even though you didn’t run all the miles?

This idea of earning food based on our activity level really starts with the idea that food is either good or bad. When we label foods as good or bad, we set ourselves up to feel guilt and shame when we don’t adhere to our own “food rules.” Then we assuage the guilt with our level of activity: more miles to justify our ‘bad’ choices.

It is true that running and the food we eat are inextricably tied to each other—in order to perform our bodies must be fueled properly. However, using our running to justify food choices creates an unhealthy relationship between our activity and our eating. Having to earn foods we enjoy through running is a recipe for a vicious cycle of guilt and unnecessary pressure, and brings negativity to two things that should be a source of joy.

In Matt Fitzgerald’s latest book, The Endurance Diet, he outlines five principles of elite endurance athletes’ diets, one of which is the “eat everything.” Fitzgerald details that for the athletes he followed, all foods were permissible. Not one athlete engaged in an elimination diet, instead they ate a wide variety of foods from all food groups and indulged in foods that might be considered bad. “Foods that bring pleasure but not physical health have a place, albeit a small one, in the diets of all health-seeking persons, including competitive endurance athletes,” Fitzgerald says.

This wholistic approach isn’t just for elite athletes, it’s the style of eating we all should be adopting. When we remove the rules and restrictions we place on our eating we remove the guilt and free mental space that can often be consumed with adhering to “food rules.”

A struggle with an eating disorder taught me firsthand that a diet built on strict food rules is not only unhealthy, it cannot be sustained. In my experience restriction always leads to overeating, maybe not immediately, but at some point the rules become unsustainable and bingeing is inevitable.

A healthy diet should be based on intuitive eating where nothing is off limits, where the focus is on fueling optimally and satisfying cravings when they arise. Here are a few tips to help you adopt a more wholistic approach to your diet:

Don’t Count Calories—Counting calories can kill intuitive eating. Instead of focusing on the caloric intake of foods, try to select foods based on their nutrient density. Choose foods of the best quality in quantities that satisfy your hunger.

Choose Variety—Select food from a wide range of food groups and avoid eliminating entire food groups from your diet. A greater variety provides the body with more nutrients.

Tune into Hunger Cues—Be mindful of the natural cues your body gives you in regards to hunger and thirst. Try to avoid doing other things while eating, like watching TV, using your computer or phone, those distractions can often cause you to miss your bodies internal cues.

Satisfy Cravings—Satisfy cravings when they appear instead of trying to dismiss them or satisfy them with a substitute. The more you try to avoid something the more time and energy you’ll expend, not to mention the thought space that will be taken up. Satisfying your cravings means you can enjoy the thing that you want and move on.