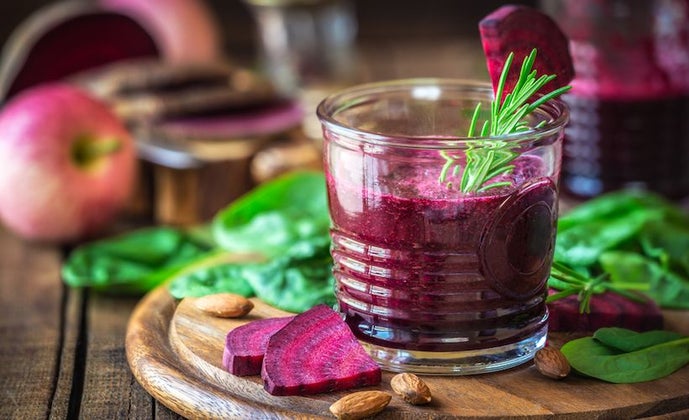 I recently read an article about a guy who experimented with beetroot juice before a marathon to see how it affected his running performance. He drank the juice for the week leading up to his marathon and shaved around 12 minutes off his overall time. As a dietitian, I value science over testimonials, so although I was skeptical, I was also intrigued. I’ve read the research on the benefits of beetroot juice for athletic performance, and I’ve even written about it on several occasions, but I’ve never tried it myself. With the Brooklyn Half Marathon on the horizon and a strong desire to run a sub-2-hour half marathon, I decided to do a little experiment of my own.

If you’ve ever read about the diets of elite runners, you may notice that many of them down a shot of beetroot juice before an important race. Why do they partake in this particular veggie? Well, beets are abundant in nitrates (not the bad kind found in deli meat), which the body converts to nitric oxide. Nitric oxide has been shown to reduce the amount of oxygen your muscles need for exercise and may enhance athletic performance. A study in the International Journal of Sports Physiology and Performance found that drinking beetroot juice two to three hours before cycling increased peak power and pedaling velocity. There are plenty of other studies that show similar results, which is why many runners incorporate beetroot juice into their fueling plans.

My Experience With Beetroot Juice

Knowing that the science behind beetroot juice is sound, I decided to give it a try every day for the week leading up to my race. But there’s just one tiny problem with this purple juice: it doesn’t taste very good. I’m not a huge fan of beets, and the juice is highly concentrated, earthy and a bit savory. I tried two different varieties—Beet-it Shots and Humann BeetElite crystals. The Beet-It shots are 2.4-ounce concentrated shots with 400 milligrams of nitrates, the optimal amount for performance improvement. The bottle recommends taking one shot 12 hours before exercise, which was perfect for me because I was nervous about tummy issues. The taste of these shots takes some getting used to—they are tangy, earthy and salty. But they didn’t upset my stomach, which was a huge win!

The Humann BeetElite crystals are a DIY drink, in which you combine two scoops of the mix with four to six ounces of water and drink 30 to 60 minutes before exercise. The mix reminded me of the vitamin C elixirs. It has “natural apple flavor” and stevia added in, so the taste was sweeter and more palatable. It’s not as easy as taking a shot right out of a bottle, but the taste made up for it.

Both varieties are great options and are quite different from each other. If you’re looking for a simple bottle that you can carry around and you don’t really mind the taste, the Beet-It shots are definitely for you. If you need your juice to be sweet, try the BeetElite.

On race morning, I skipped the beetroot juice because I didn’t want to disrupt my stomach during the race. I had been drinking it consistently for seven days, and I thought that might be enough to get the nitric oxide pumping in my veins. Unfortunately, the forecast for the Brooklyn Half Marathon called for constant rain and colder-than-usual temperatures—about 53 degrees. But I had prepared really well for this race, and I had a good mindset going in. I’ve recently been incorporating more strength training and speed work into my training, plus I had a good nutrition game plan. I’m not a naturally fast runner. I’ve run 11 half marathons, and I always clock in around 2:10 (my fastest was 2:02). I ran the New York City Half Marathon in March, with a 2:11 finish. Since I was feeling stronger lately, I decided to push myself towards that sub-2-hour race.

The race went really well, despite the weather conditions. I ran a 8:45- to 9-minute pace throughout, but I had to stop for the bathroom, which brought my overall pace down to 9:26. I finished in 2:04, and I was thrilled that I shaved seven minutes off my overall time in just two months! Was it because of the strength training, speed work or beetroot juice? Or was it all just mental? I have no idea, but I’m running the Philadelphia Half Marathon in September, and I will absolutely be incorporating beetroot juice into my training.

What Are Nitrates And Why Should You Be Eating Them?

This Smoothie Bowl With Beets Is Everything

360 YOU: Postpartum Nutrition Tips From a New Mom