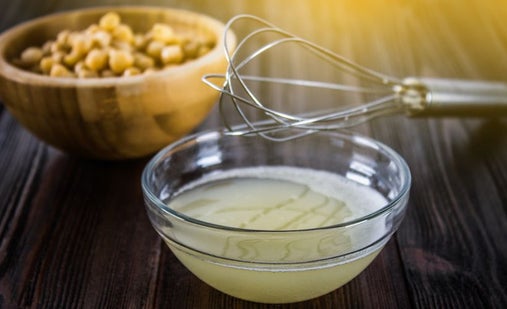 As a runner, I prioritize nutritious and delicious food. Peanut butter, oatmeal, Greek yogurt and chickpeas are just a few of my staples. But I can’t say I get too adventurous with any of them. Sure, I mix peanut butter in my oatmeal, and last week I did make bagels with Greek yogurt as an ingredient. But for the most part, I keep it pretty basic.

I’d rather spend an hour running (or hiking) outdoors than cooking in a kitchen. That being said, I’m always up for an adventure, and that includes a kitchen adventure. I’ve been known to try obscure recipes, as long as they aren’t too complicated. So, when I stumbled upon “aquafaba,” I was immediately intrigued.

As weird as it sounds, aquafaba is the liquid inside your can of chickpeas–and this bean brine is having a moment. I first heard about it on Pinterest, and then from a friend. That’s when I knew I would have to give it a try. After all, I love chickpeas. The liquid had to be pretty good too, right?

I decided to try chocolate mousse, a simple recipe that only required aquafaba and dark chocolate. Having both ingredients on hand, I set to work. Instead of draining the liquid out of the chickpea can like I normally do, I laid the chickpeas aside and focused on the liquid.

Pinterest had convinced me that aquafaba is far from useless. It’s frequently used by vegans as a replacement for egg whites, and that was its purpose in the chocolate mousse recipe, as well. To get the mousse ready, I had to whip the aquafaba for what felt like forever. My legs might be strong, but my forearms were not prepared for such effort. Once the substance had “formed a peak,” as the recipe required, I melted the chocolate and mixed the two ingredients together.

That was it. Pretty simple, right? The mousse did have to chill, so I put it in the fridge and came back the next afternoon, eager to try my creation. To be honest, it was pretty good! The texture was decent, although mine was a little watery—probably due to my inadequate mixing ability.

Was it worth the effort? I’m not sure. I understand how aquafaba is a good option for vegans, but I’m not a vegan and I’m actually quite fond of eggs, so I could’ve just as easily made this recipe with egg whites. Even so, it was fun to try, and I enjoyed the mousse as a post-run treat.

So, if you’re vegan: I highly recommend incorporating aquafaba into your recipes. If you’re not, it’s still worth a try. Aquafaba is a simple ingredient that is very versatile, and it can help make some delicious pre- or post-run snacks. As for me, I’ll probably stick with chickpeas for now, but that’s not to say I’m not interested in another fun recipe experiment with aquafaba.

5 Micronutrients Every Woman Should Pay Attention To

Nutrients You Should Always Combine To Maximize Health Benefits

Why Runners Should Care About Magnesium