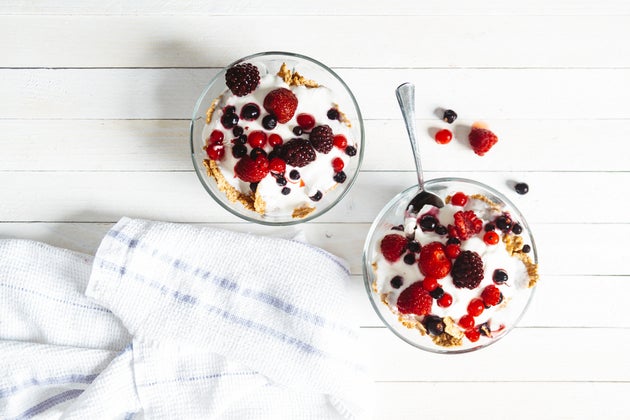 Each kind of long run requires a different breakfast. Depending on the length of run, the time of day or how hungry you are upon waking up, the type of breakfast should complement and reflect your goals for the day.

During the buildup for long distance events, I love the ritual of waking early on weekend mornings to the aroma of almost opaque, entirely bitter coffee. No matter what, there is always coffee. Always, always steaming black joe, served in an old chipped mug that invariably scratches my upper lip in the same place, every time.

Coffee is an absolutely integral part of my long-run routine, and these days is packed with power. I still prefer black coffee, but nowadays I add coconut oil, a bit of butter, cinnamon and a teaspoon or two of maple syrup or honey. Sometimes this is all I need before a shorter long run, say 8-10 miles or so. There are enough fast acting carbs and slower acting energy to help me through the mileage that I won’t have the need for a gel or other quickly accessible energy.

If I begin a 15-20-mile long run in the wee hours of the morning, say, at 4 a.m., I typically will eat less. It is very difficult for me to stomach anything before 5 a.m., but I will nibble on a gluten-free waffle (my favorites are by Van’s Foods) or a slice of Little Northern Bakehouse Gluten Free Cinnamon and Raisin Loaf, smeared with almond butter (Justin’s or a similar organic brand) and lightly drizzled with honey or maple syrup; I’ll actually toast two and wrap the second and store it in my pack for a mid-run snack.

Sometimes when my long run is on the short side (10 miles or under), I’ll munch on a few teaspoons of deliciousness that is likely the best, most nutritious and satisfying combinations of nut butters and other yumminess: Vermont MTB Butter. It’s more than peanut butter. Originally intended for mountain bikers on long rides in dense forests, not only does it boast the protein available in the pumpkin seeds, almond butter and sunflower seed butter, it also has oats, honey, and Vermont maple. An entire meal in a few spoons or squeezes, especially important for those concerned about the weight of their long distance packs. For longer long runs, I’ll smear the butter generously over a few slices of GF bread with a drizzle of honey or maple syrup. It is pure deliciousness.

Sometimes I have to do my long run later on in the morning, after that blessed hour of O-dark-thirty. Perhaps there was a basketball game or maybe I needed to sleep in a bit after a long night of being on dorm duty. For these kinds of weekend mornings, I’ll start the run after a more solid breakfast, meaning that instead of an almost purely carbohydrate filled mini-meal, I’ll go ahead and scramble an egg or two, and have it with a slice or two of toast about two hours before my run. This way, I have both slow acting and fast acting energy available a bit later on for my run. I learned this from trial and error. I noticed that on long runs in the late morning and/or early afternoon, I would bonk early on from not having enough energy stores for the 16-or-so miles I was about to do. One day, I decided to have a heavier than normal breakfast right after waking. I allowed it a few hours to digest and then went for my run and it was a success!

I don’t generally enjoy cold breakfasts—think cold cereal on a cold, windy morning in the North Georgia Mountains, in a cold house. Now, if I’m on a backpacking trip, I’ll accept cold cereal if we have limited choices—or if the camp stove doesn’t work. But if we’ve got enough denatured white alcohol fuel, and the pots have been cleaned from the previous nights’ campfire shenanigans, I’ll take the time to make some hot oatmeal.

There’s nothing like hot oatmeal on a cold morning before an epic long run. Or on a hot morning before a sweaty, lung-destroying romp through the steamy streets of some bustling city. It heats up your entire body, massages your internal organs like edible yoga, helps you expel whatever’s necessary to help you move easily through your run, and nurtures your culinary soul like nothing else can. My current favorite gluten-free oatmeal comes from Stoked Oats, a small company co-founded by the incredible endurance athlete behind the extreme sports reality series Boundless, Simon Donato. When he created Stoked oats, his vision was to feed hungry athletes a meal that was nutritious, satisfying, organic and certified gluten-free. And that he achieved. The oatmeal is amazing. Can we say dark chocolate, coffee and walnuts in one sumptuous bowl? The answer is yes. I’m sold.

If I absolutely have to eat a cold breakfast before my long run (maybe I’m pressed for time, or maybe I woke up late), I’ll settle for a yogurt parfait. I love any gluten-free Bear Naked Granola over a cup of full-fat yogurt (Noosa Strawberry Hibiscus is my current fave), sprinkled with blueberries and strawberries, bananas, maple syrup and sea salt pumpkin seeds with a small handful of pecans. If I need some extra carbs—say for a marathon or ultra, I might even drizzle the concoction with some maple syrup or local honey. See a pattern here? When in doubt, put some maple syrup or honey on it.

Breakfast is my favorite meal of the day. It sets the tone of my run, the rest of my day (that is, if I manage to actually be functional afterwards!) and feeds my running soul.