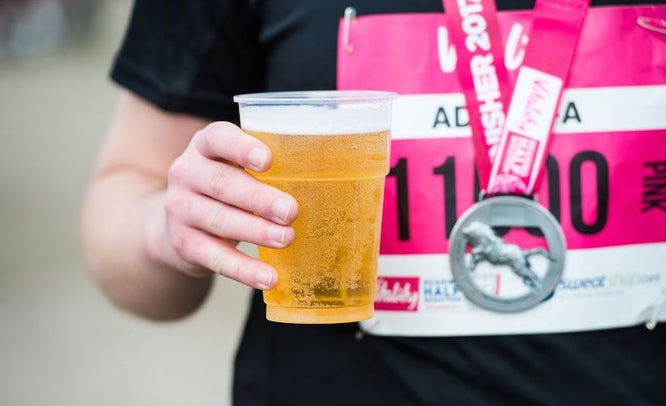 Is It Okay To Drink That Post-Race Beer?

Running and alcohol seem to make quite a team. I mean, when was the last time your race bib came without a free beer ticket attached? It’s admittedly an odd coupling—but is consuming alcohol and running bad for you?

According to Dr. Matthew Barnes, who studies the effects of alcohol and exercise at New Zealand’s Massey University, “There is no direct evidence that giving up alcohol will benefit your performance. However, we need to consider how much someone is drinking to decide if giving up alcohol might be wise.”

Related: Is It Okay To Enjoy The Post-Race Beer Garden?

Dr. Barnes gave us some general guidelines where alcohol consumption and training meet. Remember his golden rules before you guzzle down some golden ale!

Size Matters (The Size Of Your Glass, That Is)

Consuming small amounts of alcohol occasionally is unlikely to cause any issues. However, consuming large amounts regularly will likely impact recovery, adaptation and general health. If you want to optimize performance, it would pay to eliminate the consumption of large amounts of what is basically a toxic substance from your diet. Certainly in the days before a race, I wouldn’t be drinking alcohol, especially in relatively large amounts (four or more standard drinks in a day, for example), as it may upset normal hormonal balance, immunity and metabolism.

Alcohol Can Affect Your Weight

The energy in alcoholic beverages should be taken into account when trying to maintain a healthy weight or reduce body weight. The body preferentially metabolizes alcohol ahead of other fuels, and this can alter how much fat you burn. A combination of extra energy from alcoholic beverages and disruption to the normal metabolic process can lead to an increase in fat mass over time.

Beer, Wine And Vodka Are Basically All the Same (To Your Insides)

It probably doesn’t matter where the alcohol comes from. The main factor will be how much alcohol you consume—more is worse, obviously. Clear spirits tend to incur less intense hangovers than darker spirits, but I wouldn’t guarantee that you won’t get a hangover from drinking gin or vodka—the hangover may just be slightly more tolerable than one that results from drinking rum, bourbon, etc. It is also worth considering the long-term effects of moderate alcohol consumption.

In general, a hangover is unlikely to impact you physiologically; that is, your body can still perform the same as it would if not in a hungover state. There may be an increased strain on the cardiovascular system, which would make a given intensity or duration of exercise more difficult than normal, but you’d still be able to do it.

The biggest problem is the feelings of illness that are associated with the hangover. If you can exercise through that, go for it: it won’t make you feel worse or better. Hydrating properly is probably the one thing you can do to minimize the effects of a hangover. Drink plenty of water before going to bed and then again when you get up, as well as during exercise.

If you can’t get out of bed, if your head is spinning or if you feel extremely nauseous, I would suggest skipping the run.

The things you need to think about after a race are rehydration and replenishment of glycogen to ensure that you recover at an optimal rate. A couple of post-race beers are unlikely to have any detrimental effects on either of these factors.

When dehydrated, as one might be after a race, alcohol doesn’t actually make you more dehydrated. It’s a different story if you are well hydrated, because large amounts of alcohol can lead to dehydration. Even so, it is a good idea to rehydrate after exercise as soon as possible. Compared with spirits, beer tends to be relatively low in alcohol content, so while it can’t be considered a rehydration beverage, it probably isn’t too bad in small amounts.

After a race, you should also consume a meal with carbohydrates (usually simple carbs) and some protein. Small amounts of alcohol won’t impair the body’s ability to convert glucose to glycogen as long as we supply the body with carbohydrates. If a runner replaces the carbs burned during exercise with alcohol, which does happen in some circumstances, then they simply aren’t giving their body what it needs for glycogen to be replenished. Instead, they end up delaying that aspect of recovery.

Be sure to race and rehydrate responsibly out there!

Should You Give Up Alcohol During Marathon Training?

Would You Drink Healthy Alcohol?

Why It’s Time to Make Your Diet More Nutrient-Dense

Everything Runners Need to Know About the Keto Diet

Upgrade Your Toast Game With These 14 Delicious Combinations

How Steeplechaser Courtney Frerichs Keeps Composure at the Olympic Trials

Power Through the Finish: New Research on Hitting the Wall Could Help You Avoid It

Kim Conley Knows Anything Can Happen at the Olympic Trials