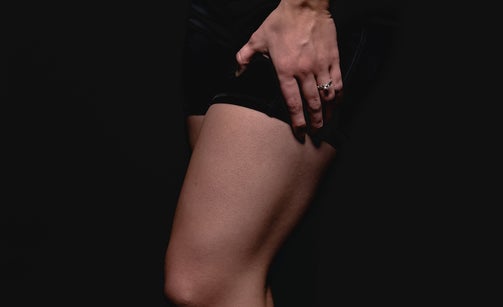 With some injuries, it’s tempting to push through the pain when symptoms flare up on a run. With others, you might as well just stop and call for an Uber. Iliotibial band syndrome (ITBS)—characterized by lateral knee pain that strikes during a run and worsens if you continue—definitely falls into the latter category.

Despite being the second-most common running injury, ITBS is in many ways a mystery. The IT band is a dense band of fascia that runs along the outside of the thigh, starting just above the hip and attaching just below the knee. Scientists are still exploring its role in the body and why it is so susceptible to injury.

ITBS has been deemed a “friction syndrome,” with symptoms occurring when the IT band rubs against and runs back and forth over the lateral epicondyle of the femur (bony protrusion on the outside of the knee) when the knee is bent at about 30 degrees.

But this theory has yet to be proven, says Kevin Maggs, D.C., a running injury specialist and chiropractor in Gainesville, Va., and director of The Running Clinic, USA. “We really don’t know what causes IT band syndrome, but we know that it’s a repetition injury. It tends to occur in distance runners and is more common on longer, slower runs,” Maggs says.

As with most running overuse injuries, training errors (doing too much, too soon) are a risk factor for ITBS. For this reason, Maggs recommends following a training plan that involves gradual increases of speed, mileage and terrain. “Everyone is different, but it is probably safe to increase your total mileage by no more than 10–20 percent per week and keep your long run less than 50 percent of your total weekly mileage,” he says.

If you suspect you have ITBS, first rest and allow the sensitized tissue to calm down. Once you can perform daily activities pain-free, Maggs recommends starting with run-walk intervals to avoid the repetition that comes with longer distances. If the pain returns, take a bit more time off and then return to the run-walk protocol, but with even less time exposure.

ITBS is often misdiagnosed, so if your pain doesn’t go away, consult with a healthcare provider to rule out other possible sources of pain, such as a stress fracture, meniscus tear or other pathologies.

Recommended exercises for treating ITBS often involve strengthening of the muscles around the IT band, based on the theory that having weak hip abductors (muscles that move the leg laterally) lead to more strain on the IT band.

Maggs’ approach is similar, but for a different reason. He suggests performing hip abduction exercises that involve loading the IT band and its surrounding musculature—not to overcome a strength deficit, but to increase tolerance of the sensitized tissue. Maggs also cautions against squats and other movements that involve knee flexion beyond 20 degrees, as this is where symptoms can start to present.

Whichever approach you take, the following exercise will set you in the right direction.

Common IT Band Symptoms And How To Treat Them

Everything You Need To Know About IT Band Syndrome

How To Deal With IT Band Issues