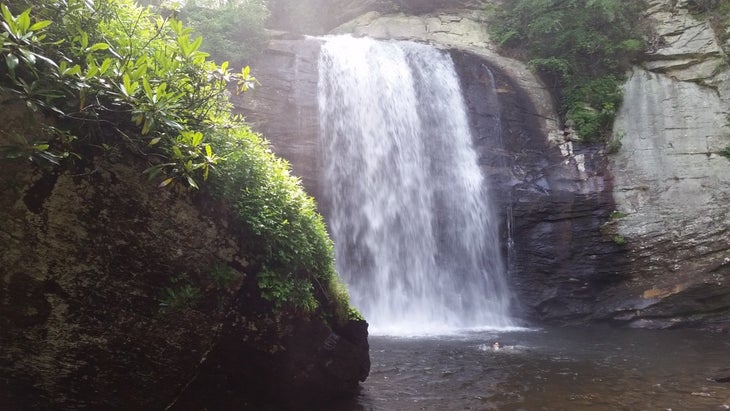 I headed to the Western North Carolina Mountains recently to spend time at the Gaia Herbs Farm. I learned about how the Gaia Herbs products could benefit runners as well as improve overall health and well-being. It was a quick trip but there was one thing I knew I had to make time for while down there—a run. The folks at Gaia were extremely helpful in suggesting local hikes that I could run and spots that tourists liked to visit while in this area.

I had intended to go for a run solo, but one of the other women on the trip, Kelly, said she wanted to tag along, and if need be would hitch a ride back to the hotel if the mileage was more than she could handle. It turned out that having Kelly with me turned what may have been an ordinary run into what felt like an epic sight-seeing adventure on foot.

A lovely woman from Gaia picked us up from our hotel and dropped us off The Center For Wildlife Education where we began our run. After checking out the Fish Hatchery on site there, we decided that we wanted to make our way to Looking Glass Falls. After checking our phones we realized that our run adventure was about to get a lot more interesting than we thought it was going to be. No mobile service meant that we really didn’t have a clue (and neither did the park ranger) of how long of a run it was going to be. Thankfully a couple of miles later we arrived at the waterfall.

Want to get in and swim?

Could I even say no? I was in the middle of a National Forest looking at the largest water fall I had ever seen. The practical side of me was thinking, “We will get soaked. I wonder if I will chafe on the way back. Where am I going to leave my phone? How deep is this?” But the word sure came out of my mouth. Before I knew it my new friend had stashed her shoes, cell phone and shirt and was already climbing rocks to get in the water. I followed and jumped into what is arguably the coldest water I’ve ever been in. It literally and figuratively took my breath away. I couldn’t stop smiling as we both were giggled like little kids splashing and swimming around in the water.

When we were climbing out a lovely couple told us that we should head up to Sliding Rock since you are already soaked.

Sure! How far is it? Oh not sure but it’s not that far away. They had no clue that we weren’t hoping in a car to get up there but would continue on our run adventure looking like wet rats. We still didn’t have cell service but it didn’t seem to matter. Anywhere we needed to go we were confident we could get to on foot. The worst case scenario was that we could ask a park ranger to use their phone to call our friend from Gaia, tell her where we were and ask if he she could pick us up there.

A little over two miles later we arrived at Sliding Rock and were bummed when we saw an entrance fee of $2 cash, since we only had credit cards. The Park Rangers couldn’t believe we had arrived on foot and said we were more than welcome to slide for free. They let us stash our running shoes and cell phones in one of their trucks. Off we went to see what all the fuss was about.

I’m not exactly the bravest person. In fact at the age of 33 my parents love telling family friends the story of me being terrified of sliding down a 6-foot slide at my great grandparents pool when I was little. It was captured on VHS tape for me to remember this moment for all eternity. Mini-me was scared to death. I’d be lying if I said I wasn’t just a bit afraid of going down this rock plunging into the cold water.

I was with Kelly though and she was fearless, so I would be too. When it was our turn to go, Kelly went first, leaving me no option but to follow her. As I splashed into the water at the bottom I again found myself smiling. Oh running, how I love you, I thought. My own two feet and a love for a sport I hated as a child have taken me all over the place, from The Great Wall of China to a waterfall in North Carolina. We only had time to slide down once before we began our run back to the wildlife center to meet our friend from Gaia. It was a little over 4 miles back and we made it back with 3 minutes to spare. It was perfect timing all around.

Our adventure was somewhere around 8 miles long but had taken us hours. They were some of the best hours I’ve spent with a new friend in a long time.

Kelly and I chatted the entire time we were together and I was reminded just how wonderful running can be in forging new friendships. When Kelly and I hugged goodbye at the airport, we both agreed that though we loved visiting Gaia Herbs and had learned a lot, we both felt that our run together was the best part of the trip.

It’s amazing the places you can go on your own two feet. I love running races but the older I get, the more I realize that I love running because it allows me to experience new things and new people. It’s not always about getting faster. All the 4:30 a.m. miles are worth it when it means I’m fit enough to go on run adventures without a care in the world as to how many miles or how long it will take me.