Amy Yoder-Begley won her first state track title in the 3200 meters as a sophomore at East Noble High School in Kendallville, Ind., in 1994. Two years later, she could barely run at all…

“I had no energy,” recalls the now- 30-year-old who represented the United States in the 2008 Beijing Olympic Marathon. “I had stomach aches, anemia, hypothyroidism, severe GI problems and dehydration during running and osteopenia.”

She was shuttled back and forth to doctors for months before she received a definitive diagnosis of celiac disease, an intestinal autoimmune disorder that is triggered by gluten, a protein in cereal grains. Gluten-containing foods were removed from Yoder-Begley’s diet, and “within three weeks all of my symptoms went away,” she says.

Fortunately, most runners never encounter diet-related problems as serious as Yoder-Begley’s battle with celiac disease. But every runner faces diet-related limitations of some kind, whether it’s poor recovery due to inadequate post-workout nutrition or difficulty reaching an ideal weight for peak performance due to excessive sugar consumption.

But the good news: The right dietary practices can help you in a number of ways, from enhancing your performance in workouts and increasing endurance to reducing your risk of injury and boosting your all-around health.

Top pro runners such as Yoder-Begley, Tera Moody, Jen Rhines and Jamie Donaldson have achieved high success in the sport thanks in part to following specific nutrition strategies that are most beneficial for female runners. In fact, each of them reports paying a price in the form of compromised performance, slower recovery and other problems when she strays from the simple plan.

Want to know their secrets? Here’s the formula that works for them—one that will work for you, too.

“I aim for five a day,” says Tera Moody, who finished fifth in the 2008 U.S. Olympic Team Trials Marathon. A resident of Boulder, Colo., Moody, 27, hits the mark by eating at least five servings of fruits and vegetables daily. “I do notice a difference when I eat more fruits and vegetables,” she says. “I have more energy and feel better running.”

Nutritionists rank foods on a continuum of nutrient density, or the variety and concentration of nutrients per calorie. Fresh fruits and vegetables are the most nutrient dense foods, while sweets and processed baked goods are among the least.

Research has shown that individuals who eat the most nutrient-dense foods tend to be leaner and healthier, which, of course, supports running performance as well.

Even some meats are more nutrient-dense than others. Free- range and grass-fed animals produce meat with less saturated fat, more omega-3 fat, more protein and higher concentrations of certain vitamins and minerals. Because of that, “the only red meat I eat is buffalo,” says Yoder-Begley. Unlike most beef, buffalo meat comes from animals that are able to move about freely and eat their natural diet.

Jamie Donaldson, an ultramarathon runner whose laurels include victory at the 2008 Badwater Ultramarathon, loves bread, but she makes a daily effort to complement her consumption of grain-based foods with plenty of fresh fruits and vegetables and quality protein sources such as chicken and yogurt. “Back in college I practically lived on bagels,” she says, “but when I started ultrarunning, I forced myself to be a lot more balanced because I knew it would help me.”

The term “balanced diet” is often used as a synonym for “healthy diet,” and with good reason. Different foods offer different nutrition profiles. No one food provides every nutrient your body needs, and many natural foods provide nutrients that few or no other foods provide. This is especially true of plant foods, which contain dozens of useful “phytonutrients” that help the body in many ways. So, the best way to ensure that your body gets enough of each nutrient is to eat a wide variety of foods.

Research has shown that individuals with more varied diets are healthier and live longer than those who eat monotonously. A study published in the Journal of the American Medical Association showed that within a population of 59,000 women, those who had the greatest variety of healthy foods in their diets were 40 percent less likely to die over a five-and-a-half-year period.

Need more incentive to balance your meals? Consider that the muscle soreness you experience the day after a run is caused in part by free radical damage to muscle cell DNA. In a recent study, researchers from the Colorado State University divided 106 women into two groups and placed them on different diets. Both groups consumed eight to 10 servings of fruits and vegetables per day, but one group ate 18 different varieties of fruits and vegetables while the other ate only five varieties. Blood tests taken after two weeks revealed that only the wide-variety group exhibited a reduction of DNA damage caused by free radicals. 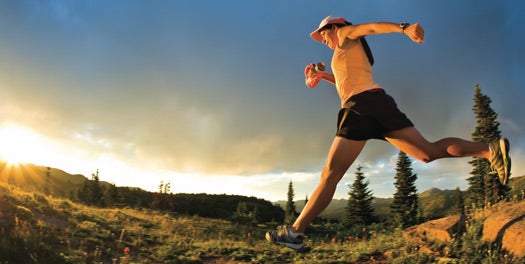 The pro runners who shared their dietary habits with us eat five times a day, on average. “In general I don’t eat huge meals,” says Moody. “I try to eat throughout the day to keep my energy up.” Most important, “I always eat something before I run and right after,” she says, noting that she recovers from runs much faster when she takes in carbs and protein immediately after finishing a workout.

Eating smaller meals and snacks throughout the day (or “grazing”) instead of a few large meals has been shown to help athletes control their weight.

A Japanese study found that boxers placed on a six-meal-a-day, weight-control diet lowered their body-fat percentage significantly more than boxers who ate exactly the same number of calories in just two meals.

Grazing is beneficial to runners because it matches the supply of energy (i.e. calories) with the body’s needs throughout the day. There is evidence that even small caloric deficits within a single day may alter metabolism in ways that have negative effects on body composition.

A study involving elite female gymnasts and distance runners found a strong inverse relationship between body fat and the number and size of energy deficits throughout the day (periods when the body’s caloric needs exceed the calorie supply available from food). The athletes who did the best job of matching their calorie intake with their caloric needs were leaner than those who tended to fall behind.

There isn’t a runner on earth who doesn’t like some type of sweets or high-fat foods (or both), and elite runners are no exceptions. Three of the four we interviewed report making some effort to limit their consumption of such foods, but not to the point of eliminating them entirely from their diets. Three-time Olympian Jen Rhines does not place any restrictions on her diet, but not because she is an unrepentant junk-food junky.

Rather, she says, “I don’t crave a lot of junk food,” and it’s probably because she allows herself regular small treats. A couple of cookies or a piece of chocolate with a mug of green tea before her afternoon run usually does the trick.

Donaldson, however, has a different approach. “I have a horrible sweet tooth so I try to avoid high-sugar and high-fat junk food (desserts, chocolate, candy, chips and soda),” she says. “I try to be pretty strict during training, but after a big race, it’s a different story. I allow myself a free week when I can eat anything I want.”

Most supplements on the market offer more hype than benefit to female athletes. But there are some that support general health or address specific health issues that elite runners consider worthwhile.

All four of the women in this story take a multivitamin to ensure that they meet their minimum daily requirements of the essential vitamins and minerals. Jen Rhines and Amy Yoder-Begley take fish oil, which provides benefits to the cardiovascular and nervous systems. And Jamie Donaldson and Tera Moody take calcium and vitamin C to prevent osteopenia and anemia, two common problems for women, which Moody has also battled.

Matt Fitzgerald is a certified sports nutritionist and editor of the sports nutrition Web site poweringmuscles.com. He has authored numerous books, including Performance Nutrition for Runners.