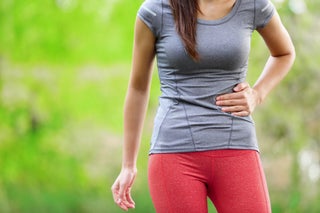 How many times have you been asked this dreaded question: “Is it that time of the month?”

We have long been accusing our menstrual cycle of being a hindrance on our training—which, let’s face it, sometimes it can be a mess—but it can actually help our performance. So can you really blame lackluster performance on Aunt Flow’s monthly visit? Probably not.

Dr. Stacy Sims, MSc, PhD, physiologist-nutrition scientist and creator of Osmo Nutrition for women, has been conducting research in her field for more than 20 years. During that time, she noticed that because the period topic can be so hush hush and taboo, its effect on our bodies is totally misunderstood.

“Because there is a stigma of talking about it, we tend to blame things—such as athletic performance—on our period, and people won’t question it,” Sims explains.

Rather than smack in the middle of menstruation, it’s actually 5 to 7 days before you begin to bleed that female athletes are most affected by their cycles and thus may underperform in races and workouts. In the days prior, your levels of estrogen and progesterone rise, explains Sims, leading to body changes, such as drop in plasma volume (which means your blood thickens), decreased total-body sodium and an increase in your core temperature and level of fatigue in your central nervous system. The first 11 or so days of bleeding (day 1 is the first day of bleeding) is actually when your body is at its strongest.

“Those first days your estrogen and progesterone levels drop, which actually makes your physiology more similar to that of a male,” explains Sims. “You can hit higher intensities in workouts—faster and longer—and your core temperature is down.”

Sims says that this doesn’t mean limit activity in the days leading up to your menstrual cycle. “The more you move, the more blood circulation you have, which helps mitigate cramping.” Also, keep in mind that you shouldn’t be doing those high-intensity sessions prior to your period. Not only will your body not be able to keep up, Sims explains, but it can also affect you mentally when you fail to perform at the level you are used to.

Gaining a better understanding our women functions will allow the subject in sport to become less taboo as it relates to performance. A note to those working with male coaches: Communicate how your body performs before, during and after your menstrual cycle.