Exercise physiologist David Nieman has spent the last 40 years studying links between exercise and immunity. It’s not a new field. But with the increasing rate of race cancellations and general concern around the global COVID-19 coronavirus outbreak, plenty of runners have found themselves wondering whether their intense training is helping, or hurting, their health.

Exercise studies show that regular, modest exercise boosts immunity, and lowers your risk of infection. That’s the good news—and the reason so many scientists believe that running and other regular exercise is a healthy, body-strengthening activity.

On the other hand, hard, continuous, long-effort exercise like marathons and ultra marathons can lower your resistance for 24 to 72 hours, and lead to increased colds and respiratory illnesses for a week or two. Too much exercise volume and intensity turns the corner on what experts refer to as the J curve—and your risk of infection goes up. 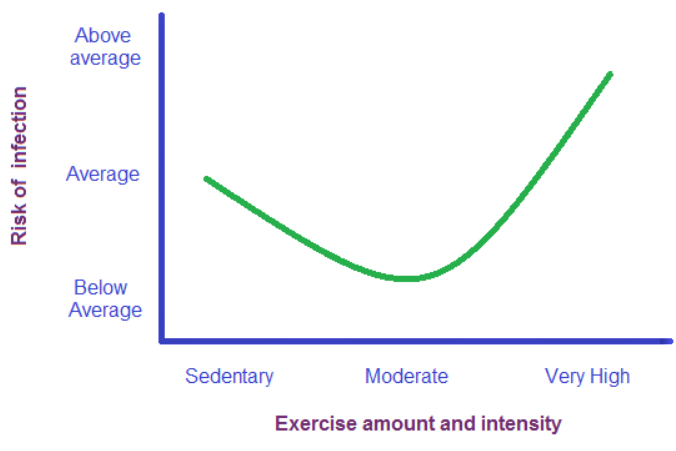 Case in point: Nieman and colleagues recently measured the immune response of Antarctic trekker Colin O’Brady, who in late 2018 became the first person to cross the continent unassisted, covering 930 miles in 54 days. The research team found that O’Brady entered a state of  “dysfunctional immune response” that was most severe during the last month when his “energy expenditure was highest, body mass was reduced, and training distress was most severe.”

In his famous exploration of immunity at the Los Angeles Marathon, Nieman found that runners who had been training 60 miles a week or more had double the post-marathon infections of those training under 20 miles a week. Overall, marathon finishers had six times more infections and respiratory illnesses post marathon than a control group of non runners. This lowered immunity was transitory, meaning it didn’t last long, but it was significant enough to produce more post-marathon illness.

Marathon Training in a Time of Coronavirus

Nieman is not trying to talk anyone out of running a marathon. He does want you to realize that your chances of contracting a virus, including coronavirus, are substantially increased after a marathon.

“After a marathon, your immune state is close to that of an older, not particularly healthy individual,” he says. “And those are the ones getting really sick and sometimes even dying.”

If you’re training for a marathon or getting ready to run one when you learn that you’ve been in contact with a known coronavirus carrier, back off. If you’re at the marathon or close to it and decide to still run your race, consider a small, private party in your hotel room rather than a festive evening in a large public space. “Social isolation for about 24 hours after a marathon can definitely lower your chances of getting sick,” Nieman notes.

But outside of racing, how exactly should you adjust your training and diet to maximize your immunity, and minimize your chances of catching the virus? Here are a few of Neiman’s biggest tips.

When it comes to training, more is not always better. For the biggest immunity-fighting response, Nieman suggests following this handy, easy to remember rule of thumb: Run less than 60 miles a week, mostly at a low intensity (60% of max VO2 corresponds to 75% of max heart rate), mostly in workouts that are less than 60 minutes at a time.

Nieman and colleagues have been surprised by one of their consistent findings. While long, hard runs seem to lower immunity, the same is not true of long, intermittent runs. In other words, a long marathon-pace run is a stressor, but if you follow a run/walk approach or even 10 minutes hard/10 minutes easy, you reduce the lower-immunity threat. “When you do a back-and-forth kind of running, your body seems to react in a favorable way, like you’ve just been out for a walk,” Nieman observes.

Nieman believes the key nutrient that bonds exercise and good health is carbohydrates: before, during and after running. In fact, he notes a whole new science of immuno-metabolism that puts glucose and glycogen in the center of healthy immunity, just like they are in endurance running.

By measuring glycogen in immune cells, Neiman has discovered that a three-hour run (with no carb intake) depletes those cells just as it depletes your leg muscles, and the immune cells become noticeably dysfunctional. You could say they bonk. When runners consume carbs during the same run, their immune cells “look and perform much better,” says Nieman.

Beyond carbs, you might also want to stock up on blueberries. Nieman has long been interested in polyphenols, flavonoids and other food substances that support immunity. In a soon-to-be-published paper, he explored the effects of blueberries on immunity and inflammation after a three-hour laboratory run. One group of runners ate a daily cup of blueberries for two weeks before the lab run. Another group didn’t. “The blueberries knocked down the pro-inflammatory response by a lot,” he says, noting that this group of runners also had less muscle soreness.

While he has investigated other frequently-mentioned approaches like vitamin C and probiotics, he finds little evidence that they make a significant contribution to immunity. In Nieman’s world, if you’re consuming healthy carbs and blueberry-like, flavonoid-rich foods, you’re about 90% down the road to an immunity-boosting diet.

When in Doubt, Do the Little Things

Everyone has been hearing plenty about washing their hands for 20 to 30 seconds several times a day, sneezing and coughing into the elbow, and not touching your face with your hands (use tissues or sanitized wipes). Nieman seconds all this advice, adding, “We’ve known this for a long time, but it’s the first time in my experience that many Americans are actually paying attention.”

In a 2019 paper published in The Journal of Sport and Health Science, “The compelling link between physical activity and the body’s defense system,”  Nieman and Laurel M. Wentz suggest several other simple and effective immunity-enhancing strategies that runners can follow all the time:

How to Fuel Your First Trimester of Pregnancy as a Runner

5 Scientific Studies that Can Help Your Running Right Now

Fine-Tune Your Marathon Training According to Your Unique Traits