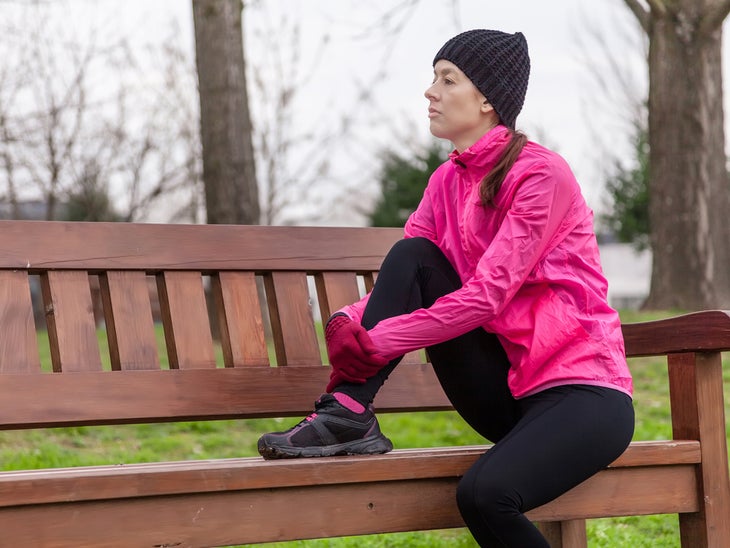 A few months ago, I ran in a small, very low-key 4-mile race that I do almost every year. I know the course well, and my fitness was good, so I went into the race feeling confident and relaxed. My goals were to keep a steady pace on the many tough hills and to give a hard effort in the last mile. I nailed both of those and even came a few steps away from winning my age group.

I was elated as I got in the car to head home, totally thrilled with the morning.

Then my inner critic got to work. Within minutes of a fun finish, I was making a mental list of all the things that I didn’t accomplish and goals I “should” have had. By the time I got home, I was hanging my head and didn’t talk about the race at all.

Runners tend to be goal-oriented people. Going into a race, we probably have at least one or two things we want to accomplish — anything from coming back strong after an injury, to achieving a PR to smoothly handling a hill we’ve struggled with in the past. We may make up a few more on the fly mid-race, like chasing down someone ahead of us or staying ahead of a pack.

We can also be highly self-critical. Even when we reach the goals we set, we can think of twice as many things we could’ve done differently — better. After bumming myself out so needlessly about the 4-mile race, I realized that I do it after just about every race, workout, or jog around the neighborhood. It had become a painful habit that I wanted to break immediately.

I needed advice from a professional, but I also wanted to find out if this was just my own bad pattern or if other runners did the same. I put together a short survey focusing on marathon training and racing. I got responses from a range of runners with a variety of experience and ability. I was half-happy and half-disappointed to find that yes, many other runners do have this same sad habit.

My takeaway from the survey comments and from my own self-talk is that there are four common ways to kill your post-race buzz.

We often have a complicated relationship with GPS watches and data. They make it too tempting and too easy to pick apart splits, minutes and seconds, or the slightest variations in paces. In fact, the numbers and charts can be more of a torment after the race than a help during it.

While numbers don’t lie, they can be awfully deceiving. With a couple of button clicks, you can measure this day against past performances — whether it’s a fair apples-to-apples comparison or not.

There can also be so many ambiguities as to how your watch comes up with the data that you’ll never really get the good (or bad) news you’re looking for.

Some days, it’s hard to tell whom you’re most of critical of: yourself or other folks in the race. You can tell yourself that the race was loaded with fast, serious runners you couldn’t have kept up with — hence “I never had a chance.” On the other hand, you can judge the people you were surrounded by as not being as strong or experienced as you are — so “of course I seemed fast.”

Statements like these only serve to diminish your pride and erase the excitement you get from your accomplishments.

A survey respondent wrote that “Competing means training very hard and getting a personal best on race day – with an ultimate end goal of a podium finish (of course depending on the size of the race and the course itself).”

Judging your performance on criteria such as course terrain and specific number of competitors is a way of imposing a vision of your most ideal race on the reality. It’s using things you tacitly agreed to when you signed up as reasons to take success away from yourself.

For example, one-third of my respondents wouldn’t consider an age-group win a “real” win if there were only one other person to compete against. There weren’t any guarantees before you arrived as to how many age-group competitors you’d have, so why use that as a success criteria?

One of the best worst ways to kill a good day is to bring body image into the mix. We all know that race pictures are rarely flattering. Seeing cellulite, a double chin or clothes stuck to your skin in unattractive places can be a cold shock. It can also be a powerful tool for chopping down your confidence.

If body image doesn’t get the job done, you may define yourself in terms you feel are negative. You may normally think of yourself as a dedicated, motivated runner, but you can quickly turn that upside down by saying things like, “I’m getting too old to PR anymore” or “I’ve gained so much weight, I was never going to take that hill fast.”

Either way, you’ve successfully pulled the rug out from under your own accomplishments.

Fear of Failure or Success?

So, why do we do this to ourselves? We do it out of a fear of success, or as I like to think of it “success anxiety.”

It may sound counterintuitive, but actually hitting the highs you aim for can be startling. When your comfort zone is built around trying but never quite getting there, success can make you feel like you’re not “yourself.”

It can also be frightening in a sense. You may feel like you’ve entered unchartered territory, and you may be at a loss as to what to aim for next. You can even feel that people expect you to raise the bar higher and will be watching your progress.

Itemizing reasons to negate your accomplishments releases these anxieties, with the added effect of keeping you safe in your familiar role.

The cycle of picking apart your performance can start innocently enough. You probably don’t even realize you’re feeling these things. But when you put your energy toward thinking about what you don’t want, instead of what you do want, you’re preventing yourself from reaching and appreciating your goals.

When you feel that you need the “how” of a goal to be explained, then the cycle of success anxiety can lead to either making excuses or being too hard on yourself. Post-race negativity naturally takes the fun out of running and racing, not to mention making us just feel bad about ourselves. Who wants their hobby to be a source of bad emotions?

Apparently not many of us. One survey respondent described competition as “…enjoying the moment from the starting line to the finish.” Sixty-three percent of survey respondents agreed that completing a marathon is one of the biggest accomplishments of their lives. It would be a shame to throw a wet blanket over either of these.

Conventional wisdom in sports psychology is that the best way to break out of success anxiety is to shut down self-criticism before you step up to race. Everyone’s relationship to success is unique, so there’s no single solution, but there are many methods of working yourself out of this hole — and out of the safe zone that’s keeping you boxed in. The most frequently suggested are:

Journaling can help you capture your current beliefs about your ability and assess your buzzkill behaviors. Visualization is intended to help you emotionally walk through a race and post-race thoughts so that you can identify where and when the negativity starts. Practice, of course, is putting your positive behaviors into action.

In my case, I’ve made big gains in overcoming the anxiety cycle by making a chart in which I place past races into categories such as perfect, successful, neutral or worthwhile. The process of writing down details of what made a race fit into a category and comparing races has showed me patterns I never fully understood.

Livestrong.com has a thorough list of questions to ask yourself to begin the process of breaking your own buzzkill cycle. With some concentrated effort and awareness, you can achieve the biggest goals you have and most importantly, feel happy and proud of yourself!