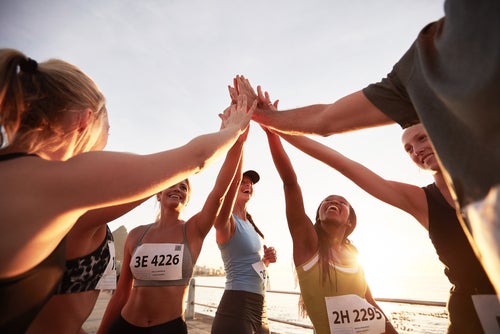 Believe it or not, I was online bullied before cyber bullying was even a concerning “thing.” Think back to the time of AOL Instant Messenger, except I was the loser who was never allowed to have AIM (Thanks, Mom!). I was obsessed with another sport besides running at the time, and someone created a fake profile for me and talked to every guy on the team…not so nicely. The result? My gear went “missing” in the boy’s locker room, people called me fat and ugly to my face, and then no one talked to me at all. So, in turn, I quit the sport cold turkey and have never looked back. I had no way to defend myself and my reaction was to just get as far away as possible. I literally had no idea what was going on until years later when the culprit was caught. I was 13 years old. Now I am 25 years old, and I am watching online bullying destroy the next sport I fell in love with. And this is an open letter to ask you to not let this happen.

Social media is arguably now half the game of the elite, professional or sponsored athlete. Every other person has a blog and is on Instagram. And to be honest, these two things have really helped me get through my first, second, third and fourth marathon. I have reached out to random women for advice, I have received emails on random Wednesdays just letting me know that a certain photo I posted helped someone get through their day, and I found an empowering female community that quite literally saved me when I was feeling incredibly lost. But I would be remiss if I did not mention that I also have received offensive, negative and rude feedback to a lot of the articles I have written for publications like Women’s Running, from other female runners. And this week, I saw some of the worst “feedback,” if I can even call it that.

This is a plea to the running community. Please take a step back. This year, we watched as a girl cheated in a race and almost took home a prize that did not belong to her. What appeared online? Racial slews, questioning of her college degree and disgusting comments about her body. When I read the article detailing the event, I was not okay with what transpired. My reaction was to feel sadness that this woman felt so much pressure in life and running that she felt she had to cheat. The words of hate I saw had nothing to do with what she did. What if that was your sister? Your daughter? Your best friend? What would you say to that loved one if someone said those things about them online? I am actually asking you to take 5 minutes out of your day and think about this, because I am having trouble finding the words as well. I can tell you one thing: If it is bothering me this much, I can only imagine how these women are feeling.

I once wrote a piece detailing everything I was thankful for through the sport of running. And frankly, it is hurting my heart to realize, again, that a sport that can bring out the best in humanity can also bring out the absolute worst. I run because of the community and the strong women I have met along the way. The community I am watching online makes me ashamed. Follow people on social media who build you up, help you become the runner you want to be, and who inspire you. If you are unfulfilled with the person you are following, unfollow them. If they are making you feel ashamed of your body, who you are, or how fast or slow you are, unfollow them. It takes two seconds. And remember, whether someone has 100 followers or 10,000 followers, they still see and read each comment on their posts. And they are still someone’s sister, daughter, or best friend.

I am asking…actually begging…you: Next time you are about to hit enter on a comment, take 30 seconds to think about a person that you would do anything for. If someone wrote a nasty comment to him or her, how would you feel? How would you feel if it was directed at you? Mistakes happen; I make them all the time. There is never an instance where shaming someone online or otherwise is a solution. You may never know what is going on behind the protection of your screen. So please, be the incredibly strong running community I fell in love with. Have each other’s backs. And just, be better.