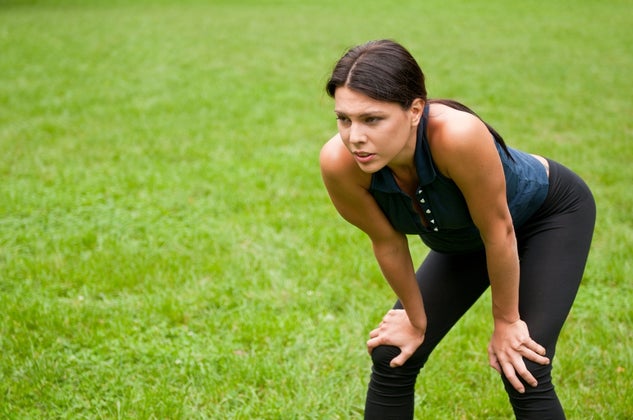 VCD stands for vocal cord dysfunction (also known as exercise-induced laryngeal obstruction) and is a common condition characterized by the throat inexplicably closing during rigorous exercise. It can dramatically increase breathing difficulty, diminish performance and often causes panic in those who experience it.

Since breathing is pretty important when it comes to running and diagnosis of VCD can be tricky, we talked with Tod Olin, MD, MCSC, a pulmonologist who cares for children and adults as the director of the Pediatric Exercise Tolerance Center at National Jewish Health for Kids, to discuss symptoms, diagnosis and treatments.

What are the symptoms of VCD?

VCD occurs in high intensity training or racing and comes on very quickly. Think of trying to breath through a straw when finishing your last lap of 800 meter repeats or during a 5K race. The loss of breath can come on as suddenly as 20 seconds and can be pretty scary for the person experiencing it.

Since the throat closure is not life threatening, it’s really more inconvenient and disheartening for runners, but not dangerous.

“[An episode of VCD] doesn’t drop people’s oxygen but it’s debilitating from a performance perspective,” Dr. Olin noted. “You would have to really slow down and maybe even stop completely [to restore normal breathing],” which of course is not ideal for competitive or recreational runners.

How Is VCD Diagnosed?

“I have the fanciest set up…or at least the top five!” Dr. Olin said this in such an enthusiastic tone, one could tell he loves his work and is proud of the people he has been able to help.

According to Dr. Olin, the “gold standard” for diagnosis is to use a continuous laryngoscopy device during high intensity exercise. The way they do this in Dr. Olin’s lab is by putting the device through the patient’s nose and into the back of their mouth so the doctor can actually see the patient’s throat close when they suffer an attack.

How is VCD different from asthma?

According to the American Academy of Allergy Asthma and Immunology, VCD is often confused with asthma because the two afflictions share similar symptoms. That being said, there are important differences.

“In asthma, the airways (bronchial tubes) tighten, making breathing difficult,” the AAAAI explains on its website. “With VCD, the vocal cord muscles tighten, which also makes breathing difficult. Unlike asthma, VCD is not an allergic response starting in the immune system.”

VCD attacks are often characterized by scary, noisy breathing that occurs during high intensity exercise. Meanwhile, asthma is largely characterized by coughing and chest tightness. While people with asthma experience symptoms that vary in severity depending on the individual experiencing them, AAAAI explains that, “Unlike asthma, VCD causes more difficulty breathing in than breathing out. The reverse is true for symptoms of asthma.”

To add to the confusion, many people with asthma also suffer from VCD. However, the treatments and medications used to treat asthma and VCD are different, which makes proper diagnosis essential.

A pulmonologist (like Dr. Olin) or allergist/immunologist has specialized training and experience in the diagnosis, treatment and management of complex conditions such as asthma and VCD.

What are the treatments?

Unfortunately, this is where things get complicated. “Things are all over the map because it’s not a well understood problem,” Dr. Olin said.

The best treatment would be for an individual to seek out someone like Dr. Olin (if you live in the Denver, Colo. area, you can book an appointment directly with him) and begin a mix of cognitive behavioral therapy as well as learned breathing techniques that can actually be taught as the attack is occurring.

“With the camera in place, and the patient doing high intensity exercise, I teach them how to breathe, which is totally unnatural but it seems to work,” says Dr. Olin and, on the behavioral side of things “we try to teach patients appropriate goal setting, motivation, refocusing and dealing with positive and negative events naturally.”

Of course the behavioral treatments, Dr. Olin concedes, have varying degrees of success.

“The most successful patients are the ones that actively engage in a collaborative dialogue with open-mindedness towards trying new breathing techniques and behavioral approaches to stress” he stated.

Dr. Olin went on to say that the opposite mindset can lead to a delay in progress. “On the other hand, patients who are hesitant to change their routines or mindset might require more time to improve, which is something we see at all ability levels, from teenagers to professional athletes.”

Dr. Olin was adamant that people suffering from VCD should “stick with it until they get it cured because it is curable,” and added that working with someone who believes in it’s existence is obviously the first step.

Dr. Olin assured me there are plenty of doctors willing to work through treatments for VCD and the prevailing message is this: “The patients are not crazy and the doctors are not perfect, but you have to find the right person.”

The Connections Between Overtraining and Underfueling

“I’d Like to Think of Parkinson’s as My Superpower”