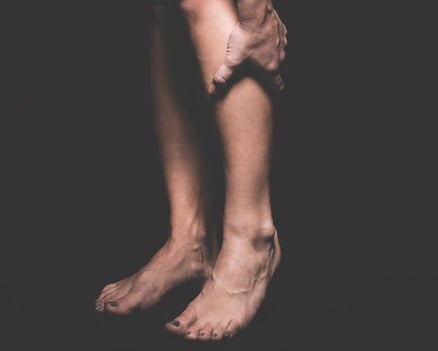 While we often praise the powerhouse glutes and first-responder feet for their contributions to gait, it’s the calves that ultimately pull your heels up from the ground to allow forward movement. Injuring one or more of these hardworking lower-leg muscles can stop you dead in your tracks.

Two major muscles comprise the calves. The gastrocnemius, which is the more superficial of these two, starts behind the knee as lateral and medial heads and attaches at the heel. The soleus lies deep beneath the gastrocnemius and runs from just below the knee down to the heel. Both of these muscles work to plantar flex the foot during running; the gastrocnemius also assists with flexion of the knee.

Related: This Is Your Body When You Don’t Stretch

Runners typically experience calf pain in the form of strains, which can range from mild stretching or complete tearing of a muscle, or cramps, which occur when a muscle is stuck in a state of contraction, says Chris Johnson, a physical therapist in Seattle, Wash., who works with runners and triathletes. Fortunately, he says, most serious calf injuries can be avoided.

Say you’re doing speedwork and you feel a “pop!” in the back of your lower leg. If intense calf pain strikes suddenly on a run—particularly when you’ve been doing ballistic movements such as strides or sprints—you’ve likely strained a calf muscle, Johnson says.

Preventing calf strains is usually a matter of exercising moderation and smart progression. Johnson recommends gradually upping the intensity of your training and easing into runs. “Take time to warm up with a 10-minute fitness walk to increase blood flow before hard efforts,” he says.

It’s also important to train the leg muscles for the specific demands of running, which means incorporating plyometric movements such as hopping and jumping into your strength-training regimen.

Treatment of a strain typically involves RICE (rest, ice, compress, elevate) followed by exercises to gradually restore strength and function to the muscle, which can take up to three months, depending on the severity.

Cramping indicates that a muscle is in an intense state of contraction and needs to be lengthened in order for the cramping to resolve. It’s not clear what exactly causes some people to experience cramps, but science suggests that they can be brought on by some combination of muscle fatigue, dehydration and sodium imbalance. If you experience cramping while on a run, stop immediately and try to get the muscle to relax. You can gently massage or stretch your calves, making sure not to overdo it.

If you regularly experience charley horse–like cramps, but fluid and salt intake is not an issue, your calves may be underprepared for the amount of work they’re doing. Johnson recommends sticking to a training plan and including exercises to strengthen the calf muscles as well as the rest of the lower body.

“Some good exercises to practice include single-leg calf raises, tiptoe marching, heavy farmer’s carries and bridging,” Johnson says. “The goal is to build tissues around the calf muscle complex.”

A runner’s calves need to withstand the impact forces of running, so it is important to incorporate moves that simulate these forces in a strength-training program. Chris Johnson, a Seattle-based physical therapist, recommends following a progression of “load, move, bounce, hop,” making sure to ease into single-leg work and plyometrics if you are working your way back to running after a calf injury.

Load (isometrics): First practice loading the calves bilaterally, standing on your tiptoes for 30 seconds. Progress to standing on one foot at a time.

Move: Work toward three sets of 10 to 15 bilateral calf raises (with knees bent and straight), and then progress to doing them single-legged. You can do these standing or seated on a calf raise machine.

Bounce: Practice small, controlled hops off the ground, landing on the balls of your feet. Johnson recommends making a foursquare grid on the ground and working your way around the grid, both clockwise and counterclockwise. Progress to single-leg hops.

Hop: Practice hopping onto and off of a low step. Start by taking off from the ground and landing on the balls of your feet on the step; then immediately hop backward to your starting position on the ground. Progress to taking off and landing on one foot.

Do These Moves To Prevent Foot And Ankle Injuries

7 Exercises To Strengthen Toes That Every Runner Should Do