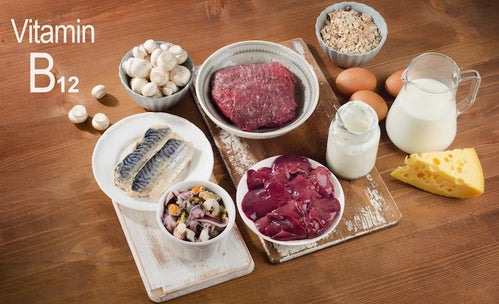 In a recent tweet, a runner posted that she is having difficulty sleeping at night. Her foot is experiencing twitches and tingling sensations. One of her big toes is numb and cramping. She is describing the symptoms I experienced for over a year before I was diagnosed with myelopathy of the spinal cord due to severe B12 deficiency. This runner’s tweet (as well as the emails and messages I receive via my website and Facebook page from as far away as Nepal, India and Lebanon to as close to as Canada and the United States from runners who have reached out to me after reading my B12 deficiency story to share their similar symptoms) compels me to educate fellow runners and athletes about B12 deficiency–the symptoms, causes, treatments and the serious consequences of untreated B12 deficiency.

B12 is essential in the production of healthy red blood cells and bone marrow. Our bodies require B12 to sustain a healthy brain and nervous system. B12 helps to produce the myelin sheath around our nerves. Pernicious anemia, immune system disorders, heavy drinking and Celiac disease are some common causes of B12 deficiency.

It’s not uncommon to associate B12 deficiency with a vegetarian diet. I am not a vegetarian. Before I was diagnosed, my B12 deficiency symptoms included numbness, twitching, tingling and painful spasms and cramps affecting my hands, legs and toes. My right foot began to twitch and cramp. My right toe became numb. It would painfully curl backwards in my sleep. Excruciatingly painful spasms in my right calf also woke me up in the middle of the night. The burning and numbing sensation in both feet and toes made wearing shoes uncomfortable. My fingers painfully locked, fanned out and became stiff anytime, anywhere. These symptoms began to affect my gait, walking and running. I could not walk normally. I could not push through my training runs. My legs experienced muscle weakness, tingling and electrical shock-like sensations. I had difficulty climbing stairs. I felt short of breath. I could no longer run distances in the time I was accustomed. I found out that my body does not absorb enough B12 from the foods I eat. Without enough B12, I developed the above neurologic symptoms, though there are other symptoms besides those listed above.

Untreated B12 deficiency can lead to serious health consequences, including paralysis, dementia and psychosis. For some, a daily oral B12 supplement is sufficient treatment. Some will require B12 injections. Whatever your symptoms, see a doctor before seeking treatment. Explain your symptoms to your doctor and ask to have your B12 and MMA (methylmalonic acid) levels checked.

Of these levels, my neurologist, Dr. David Cornblath at Johns Hopkins, explained, “Both should be normal. One confusing thing in the measurement of B12 alone is that some people have ‘normal’ values but are actually B12 deficient. This can happen when the levels are ‘low normal,’ usually about 200 to 400 [ng/dL], depending on the lab where the B12 is measured. That is why it is important to measure both B12 and MMA at the same time, as an elevated MMA can indicate B12 deficiency even if the B12 is ‘normal.’ When the levels come back, ask to see them yourself and ask questions of your doctor if there is any question of normal B12 metabolism.”

In my case, my B12 levels were very low and my MMA levels were very high, indicating B12 deficiency. I have been on B12 shots since 2009. Because I’m an ultrarunner and am always training for my next event, I am getting biweekly 1000mcg B12 injections and taking a daily 1000mcg oral tablet.

Don’t Let Unchecked B12 Deficiency Slow You Down

Before I was diagnosed in 2009, I had finished nine marathons, a bunch of half marathons and four 50-mile ultramarathons. In hindsight, I suspect my two back-to-back DNF ultras in 2008 may have been the result of my B12 deficiency. I had been experiencing fatigue, shortness of breath, twitching and numbness I could not explain during my training and races, as well as in my daily life.

In 2017, I experienced a new bout of B12 deficiency I had not expected–depletion of my B12 caused by medications I was taking to reduce gastroesophageal reflux disease and heartburn. I had been taking the medication for 10 months when I ran the 2017 Wildcat 100 Ultramarathon. During the race, my toes were burning, and this really slowed me down. For about a month after the ultra, my legs and arms experienced tingling sensations. My fingers twitched. I was weak. I had no energy to run, walk or strength train. After having my B12 levels checked, I discovered that it had decreased from over 2000 to 1226, a direct result of the medication. As a result, my biweekly B12 injections were increased to weekly 1000mcg injections and my daily oral intake doubled. My B12 levels went back up, the symptoms subsided and I began training for my 22nd ultra.

Untreated B12 deficiency can be life-threatening. It can lead to paralysis, dementia, psychosis and permanent damage. My right toe has residual numbness. Still, from time to time, my fingers will painfully twitch, my calves will painfully spasm when I stretch before getting out of bed and my toes will painfully cramp at rest. If you are having tingling, numbness and spasms in your limbs and are awakened by painful calf and toe cramps, or if you experience any other symptoms associated with B12 deficiency, get your B12 and MMA levels checked. Don’t let your doctor brush off your symptoms. If your symptoms persist even after getting a B12 shot, one injection may not be enough. Every patient is different. Find a top neurologist. Get second and third opinions. Don’t let disabling and dangerous B12 deficiency stop you from crossing the finish line!

How To Tell If You Need Vitamin D Supplementation

What Runners Should Know About Taking Vitamin C