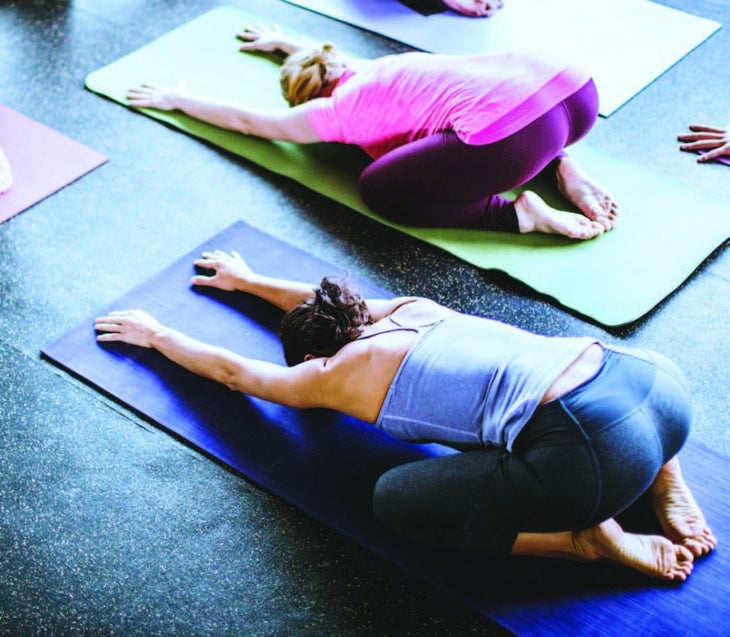 Yogis and marathoners are not often grouped in the same category. They seem like opposite ends of the exercise spectrum to most people. That’s why, when I decided to train for a full marathon while also being a yogi, I got a lot of questioning glances. However, training as a runner and as a yogi has been an amazing journey that has shaped me into my healthiest and happiest self.

Yoga was the first exercise I really got into. I liked the pace and style of yoga, and it seemed like something my body could actually do. I enjoyed being able to choose certain poses and work on them for weeks or even months until I mastered them. Challenging poses like Crow and Headstand were ones that I worked on tirelessly.

I really wanted to master yoga, so I took my time with it and gave it my full attention for quite a few years and didn’t really try any other forms of exercise. Until I started running.

Looking back, I’d say that yoga was a gateway exercise for me. After a long time of practicing yoga, I felt like I wanted a new challenge. I’d love to tell you that my decision to run came to me while I was peacefully meditating in a field of daisies—but that’s not reality. My yoga practice helps to keep me centered, for certain, but I can still be impulsive. The day arrived when I decided that I wanted to expand my fitness and push my mind and body to the limit. I wasn’t a runner, but I decided that day that I was going to train for a half marathon.

This was such a different form of exercise and it took some getting used to. Instead of moving my body slowly, I was pushing my body faster and faster. Instead of breathing in a slow and relaxed way, I was huffing and puffing like the big bad wolf. These new changes were challenging for me, but I kept up with it and I didn’t stop yoga, either.

During my time training as a runner, I continued dedicating time to yoga. Keeping up with a regular yoga practice helped me keep my body flexible and avoid injuries, and it also allowed me to check in with myself mentally. It also gave me a chance to reflect and remember why I started running in the first place and get my motivation and drive back.

The focus required for running and yoga are similar, but different. I spend time focusing on my breathing doing both activities, but during yoga I never reach a point where I want to turn back or quit. When I’m doing a 10-mile training run, though, I can find myself thinking “Okay, Jen, let’s go home and eat now.” I quickly think to myself “Oh, stop, you’ve just got 2 more miles. Anyone can run 2 miles. Just focus.” I know that the voice in my head that’s telling me to keep going wouldn’t be there without my yoga practice.

Once I trained for and completed the half marathon, the next step seemed to be a full marathon. I’m always looking for new challenges and new goals to reach. Training for a full marathon is my next goal, and I know that yoga will help me get there.

After all, yoga’s benefit to runners isn’t a secret. It can be a great warm-up and cool-down exercise. Poses like Pigeon and Dancer help warm up the muscles to avoid injury. Yoga also helps work on balance and perseverance. Overall, yoga is a great remedy for the body after running miles and miles, because it helps rejuvenate the body and the mind. I really don’t know why more runners don’t use yoga.

I used, and still use, yoga as a way to be with myself completely and send myself positive thoughts. While running, I can also look into myself, but it’s not quite the same. I can be with myself fully, but my mind is constantly racing and my body is pushing itself to get to the next goal. With yoga, I can be with myself in a quiet and peaceful setting. I can focus on my breathing and breathe full and deep breaths, which is the opposite of what happens when I run. In this way, yoga has been an essential part of my running experience.

Without yoga, I don’t think I would be the motivated and consistent runner that I am. Not only has yoga helped me understand my thoughts and mind, it has helped me know my body inside and out. I know exactly what my body is capable of, and I don’t doubt what I can do anymore. If you told me ten years ago that I would be training for a full marathon, I would have laughed at you. I would have laughed right in your face. I didn’t think my body would be able to handle even a half marathon. However, after practicing yoga and getting in tune with my body, I now know that I can push myself and that my body will persevere.

For me, being an avid yogi and being a runner go hand-in-hand. I am now at the point where I can’t imagine one without the other. Without yoga, I don’t think I’d be the runner that I am, mentally or physically. And without running, I don’t think I’d appreciate yoga as much as I do. They both push my body in different ways, allow me to overcome new obstacles, give me something to work towards and make me excited about waking up each day.

So, to those people who say, “You do yoga and run marathons? That seems weird. Why?” I say, “Why aren’t you?”