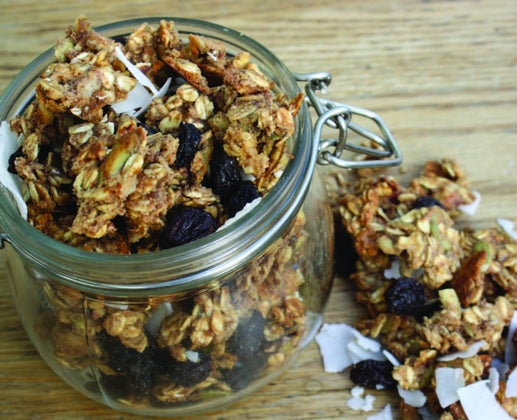 The perfect midday snack or smoothie topper, this fruit-sweetened superfood-packed granola will have you energized and ready to run!

Preheat oven to 325 degrees. In a large mixing bowl, combine oats, chia seeds, sunflower seeds, almonds, cinnamon, nutmeg and salt. Place apple, dates, water and oil in a food processor or blender. Pulse until evenly combined. Mix wet with dry ingredients until evenly coated. On a baking tray with parchment paper and nonstick spray, spread mixture evenly. You want it to be a thin layer, so two trays might be necessary. Bake for 35 minutes. Take it out and ﬂip it or mix it (do not overmix, or this will leave you with granola that is just crumbs). Bake an additional 35 minutes, checking on it every so often. You want it to be golden brown; it will harden and get crunchy once cooled. I like to leave it in the oven with the oven turned off for an additional 10 minutes. After cooking, toss in dried figs and coconut. Store in an airtight container or in the freezer.