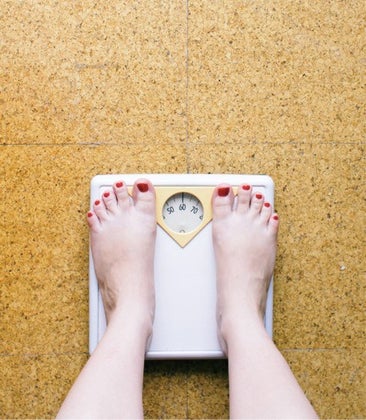 It’s a common runner phenomenon: You start ramping up mileage for your next big race and the scale starts creeping up. Huh? Shouldn’t it be the opposite? The term for this is “train gain,” and it doesn’t just strike newbies. “It can happen to anyone at any point in their running career,” says Indianapolis-based sports dietitian Jackie Dikos.

Here’s the good news: It’s not always body fat. The extra couple of pounds could be more muscle the body puts on as it becomes stronger. Registered dietitian Kate Davis, owner of RDKate Sports Nutrition in Naperville, Ill., explains, “Your performance on your runs can clue you in on if the weight is extra fat or muscle,” she says. (Translation: If you’re slowing down, it’s probably not healthy muscle.) In any case, unwanted pounds can be overcome by sidestepping these six mistakes runners often make while training.

You’re skimping on sleep.
Early morning runs might cut into your shut-eye sessions, leaving you fatigued during the day. On top of that, you might be stressing your body out with a crazy hard training plan you weren’t quite ready for. In response, the body often craves extra calories as a quick source of energy, explains Dikos.

Beat gain: In terms of sleep, look at your habits. That may be something as simple as turning the TV o one hour earlier so you can make up the time lost in the morning. If your training is leaving your body exhausted, it’s important to examine your regimen and make adjustments as necessary. For example, are there down weeks built into your training plan where you back off the mileage—or is every week adding distance and intensity?

You’re too focused on calories.
Have you heard the idea that running burns 100 calories per mile? While that’s generally true (though it differs for everyone), Dikos does not have her athletes count calories—even those who are looking to lose weight. Calculating cals can be a good way to learn what foods have more than others, but after that it can actually lead to weight gain. Thinking of meals as purely a numbers game ensures you will become out of touch with your body.

Beat gain: Let your internal hunger cues be your guide. Dikos suggests paying attention to signs of fullness, like pressure  in your stomach or less enjoyment from your meal, and stopping accordingly.

You weigh yourself before a long run.
Though it can be a shock—how’d you gain two pounds overnight?—it’s totally normal to see a jump in the scale at this time. When you’ve been eating more carbs, your muscles store carbs (glycogen) and water along with it, so it’s likely water weight.

Beat gain: The key is to resist feeling frustrated and throwing in the towel. (I’m gaining weight like crazy, there’s no going back now!) Don’t overreact. You may sweat out a lot of that on your run or pee out the extra water. “Isn’t it better to be hydrated and fueled for long endurance workouts?” asks Davis. If it causes too much strife, don’t step on the scale next time.

You’re too strict.
“Many athletes I work with see food as good or bad,” says Dikos. “They try to  eat low-cal foods as much as possible to lose weight.” The problem: In an effort to avoid, say, pasta, you might restrict yourself too much, which can cause you to snap and scarf down a sleeve of cookies.

Beat gain: All foods fit into a healthy runner’s diet, so ditch the labels. Focus on what your body craves for fuel, including healthy carbs, protein and fat. Having that balance will help you resist binges later on.

You’re rewarding yourself with food.
You just ran 10 miles, so you should have a doughnut and pancakes with breakfast, right? While it may have taken you an hour and a half to run, you can easily replenish those calories burned in 5 minutes with junk food.

Beat gain: After a long run, focus on getting good nutrition to replenish glycogen stores and stimulate muscle recovery, advises Davis. Examples: Eat an apple and nut butter, a protein-packed smoothie or a whole-wheat tortilla with black beans and avocado. At lunch or dinner, enjoy a side order of fries or an ice cream cone, because if there was ever a time to do it, it’s on a high-mileage day. Just be careful you’re not making it a free-for-all and the mentality doesn’t bleed into your next 10 meals.

You’re eating and drinking too much during the run.
“There is so much emphasis on keeping yourself fueled during runs that some runners take in too many calories in the form of gels, sports drinks, sport beans and other products,” says Davis. For example, 12 ounces of Gatorade packs 80 calories, while one energy gel contains 100 calories. Add that to a before- and after-workout snack, and things add up.

Beat gain: If you have a snack before your workout, you don’t need any more fuel unless you’re running longer than 75 minutes. Water is usually enough for shorter times and distances. On long runs, Davis recommends aiming for 30 to 60 grams of carbohydrate per hour of exercise.