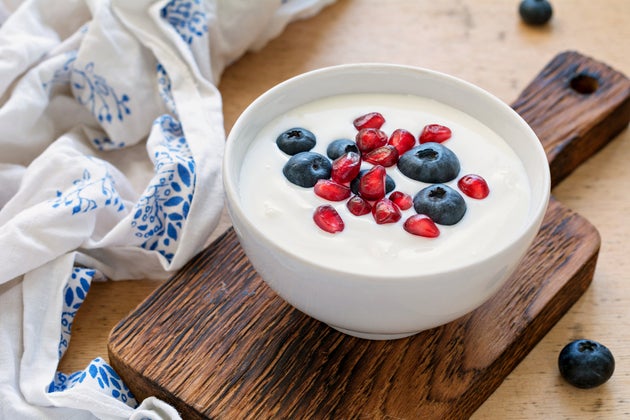 We all run for different reasons. Some do it for the joy of running, others to maintain their physical fitness and some to lose weight. Many of my clients started running as a way to shed a few pounds, but they struggle to find the right balance between cutting back on calories and eating enough to properly fuel their runs. But, luckily, there are some foods that are perfect for both weight loss and fuel, including these six foods.

A recent study found that women who consumed a diet rich in flavonoids—found in blueberries and strawberries—experienced a smaller increase in BMI over 14 years than those who did not eat berries. Not to mention that berries are rich in antioxidants, which prevent heart disease and decrease your risk of developing cancer. And they are a low-calorie food that won’t upset your stomach during a run. One cup of strawberries has only 50 calories and 12 grams of carbs to power your run. Try adding them to a pre-run yogurt, oatmeal or place them atop toast with peanut butter, for a sugarless PB&J.

Not only do mushrooms have a meaty flavor, but some research suggests that replacing meat with mushrooms may have a positive effect on body weight. It makes sense since 100 grams of mushrooms has about 20 calories and that same amount of red meat has about 200 calories. Plus, a cup of mushrooms has about 23 percent of your daily value of Vitamin D, a nutrient that is lacking in most American’s diets. Include more mushrooms in your diet by adding them to an omelet, salad or subbing them for meat in virtually any dish.

Protein increases the feeling of fullness better than any other macronutrient. Because Greek yogurt is so high in protein, it’s one of the best things to add to your diet to help you lose weight. Plus, Greek yogurt is high in calcium and Vitamin D, both of which are essential for bone and joint health. While Greek yogurt can be good fuel 1-2 hours before a run, it’s better as a post-run recovery snack. Refueling with proper amounts of protein after a run is just as important as fueling before because it will curb your runner’s hunger and stop you from overeating later in the day. If you don’t like Greek yogurt on its own, add it to a smoothie or put a dollop on something savory, like veggie tacos or a baked sweet potato—it tastes like sour cream without all the fat!

Eggs get a bad reputation because of their cholesterol content, but the new Dietary Guidelines have removed cholesterol recommendations, proving that eggs should be part of a healthy diet. One large egg has 13 essential vitamins and minerals and 6 grams of protein minerals for just 70 calories. They also contain leucine, which plays a role in stimulating muscle growth. One study found that men who consumed an egg breakfast instead of a bagel at breakfast were less hungry as a result and ate less throughout the day. So, add an egg to your breakfast and get the vitamins and minerals you need to fuel you and keep you satisfied throughout the day.

This option may sound counter-intuitive since almonds are higher in calories than other traditional snacks, but they provide plenty of protein and “good” fat. That protein and fat helps you stay fuller longer and are great for post-run refuel. Plus, a 2012 study found that a one-ounce serving of almonds (about 23 nuts) has just 129 calories, or 20 percent less than previously thought. More reseach has determined that the chewing process does not completely break down almond cell walls, leaving a portion of the cells intact and unabsorbed during digestion. In other words, you don’t absorb all of the calories of an almond!

All runners know that bread is great pre-run fuel, but many people hoping to shed a few pounds are scared of bread. But, a new study suggests that eating whole grains instead of refined grains may help keep you slim and actually speed up your metabolism. Plus, whole wheat bread has more fiber and protein than white bread, so it keeps you full long after eating. So, don’t be afraid of that pre-run toast!