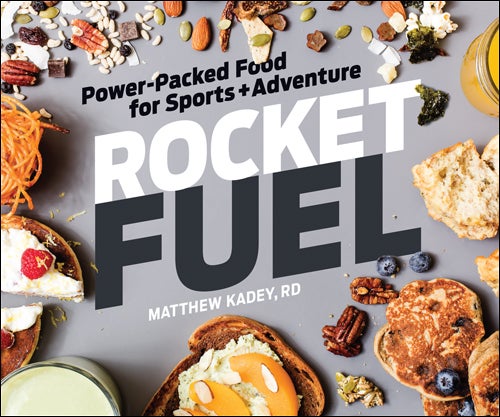 While the day of the prepackaged gel and bar hasn’t yet come and gone, and likely won’t ever disappear, there is a broad movement in sports nutrition toward once again embracing real food. More people are becoming aware of the potential benefits of ditching some of the store-bought stuff for made-with-love forms of performance nutrition that keep them naturally fit.

Diet has become the new essential and important arena that athletes are scrutinizing to find competitive gains. No longer is the athletic crowd using their workouts as an excuse to stuff themselves silly on boxed cereal and frozen pizza with too many multisyllabic ingredients. Instead, amateurs and pros alike are applying the same level of intensity and focus to their eating habits as they do to their training and competition. That’s because it’s now well understood that sound nutrition is a vital element in overall performance.

RELATED: The Difference Between Real And Pre-Packaged Nutrition

Keeping this in mind, athletes are becoming cognizant that healthy eating does not just apply to mealtime but also to the fuel they pump into their bodies before, during, and after workouts. This means that people are increasingly asking themselves why athletes are fueling life’s adventures with items made from high-fructose corn syrup and mystery flavoring when they could energize their pursuit with more wholesome local honey and real fruit. Kitchen-savvy athletes understand that ingredients such as nuts, fruits, and whole grains used as the backbone for more natural forms of energy also deliver a bounty of nutrients necessary for overall well-being. In short, homemade sports nutrition is simply an extension of the wider pull toward a more nutritious overall diet.

Further, people are increasingly skeptical about the ingredients found in many forms of engineered sports foods. For too long, packaged sports products have benefited from a health halo owing to their association with athletics. But now, athletes who have regularly turned to these items for a fitness boost are scrutinizing ingredient lists—and what they’re seeing is not always appetizing. Some of the same ingredients you would find in supermarket foods, like highly processed sugars and preservatives deemed to be “junk food,” are also all too common in a number of sports nutrition items. Sure, lab-created sports foods are convenient and popular, but are they actually optimal fuel for an overall healthy body? For many people, it’s about having more control over what they put in their bodies and stressing quality over convenience. Sometimes simpler is better.

As much as we’d all like to think we’re riding an innovative new wave in this turn to homemade sports foods, the concept of real food as athletic fuel isn’t without precedent. The numerous forms of athletics existed well before gels and chews flooded the market, and somehow athletes still were able to cross the finish line. The Olympians of yesteryear who weren’t able to quaff Gatorade understood that Mother Nature knows a thing or two about fueling active pursuits. Before sports drinks, bars, and neon goo became race-day staples, athletes tapped the produce, bread, and dairy aisles for a competitive edge. In fact, the engineered sports-food phenomenon is still very much rooted in North American society. In Europe and South America, for example, you won’t see the sheer variety of packaged energy foods on offer here. When the athletic crowd on other continents is feeling peckish, they may very well reach for a sandwich rather than a bar. If you need proof that you can go fast without relying solely on PowerBars and their counterparts, just look in the musette bags of Grand Tour riders, which can include tasty treats ranging from rice cakes to panini.

RELATED: How To Fuel Long Runs With Real Food

I’m also an ardent believer in real-food fuel, both from my perspective as a dietitian and as a cyclist. I’ve cycled thousands of miles in dozens of countries without needing to overload my panniers with bars and gels. (OK, I once had to rely on a few too many energy bars in Cuba when I couldn’t stomach another lackluster peso pizza.) Instead, whenever I’ve felt hungry and a little sluggish, I’ve turned to actual food. Save for the rare occurrence of needing to find a bathroom pronto, it has never let me down or left me feeling weak in the legs and wanting extra energy from engineered sports fuel. When I need a power boost, a mound of refreshing papaya salad and pad Thai in Thailand or a handheld pie in Argentina have historically been more of what I crave in nearly every way compared to a brick of tapioca syrup.

Despite my firm preference for real-food fuel, I’ll concede that the use of these prepackaged items is often unavoidable and that there will continue to be a market for them (including yours truly), but let me present what I consider a rock-solid case for powering your active lifestyle more often with do-it-yourself, all-natural fuel from your kitchen instead of the science lab.

Matt Kadey, RD is a James Beard Award winner and registered dietitian. In Rocket Fuel, he offers 126 of his creative and delicious recipes for before, during and after activities like hiking, cycling, trail running, camping, backpacking, climbing, fueling up the team at halftime, or just getting around town on a busy day.