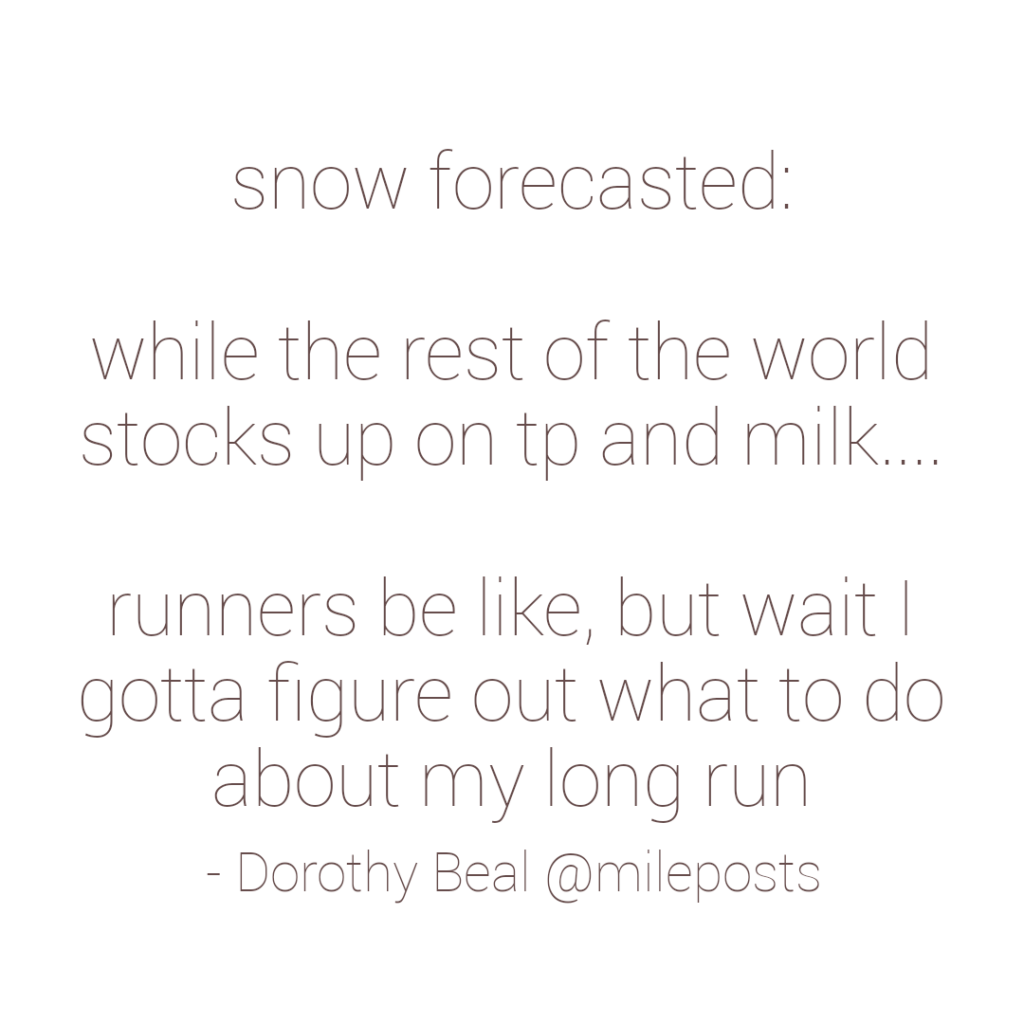 As I sit here snuggled in Old Navy fleece, my family, and the rest of the DC metro area, is bracing for what may be one of the largest snow storms in recent memories.

I was able to sneak in 12 outdoor miles with my mom before the flurries started. With 30 inches of snow predicted from winter storm Jonas, I see a lot of treadmill running for me and other runners in the storm’s path.

Treadmill lovers and treadmill loathers alike can agree on one thing—watching TV makes the miles move by just a bit faster. If you are looking for a new-to-you series to keep you entertained this weekend, here are a few of my recent favorites.

Orphan Black. BBC America isn’t a channel that I think to check for shows I would like, but every single time I watch a series from them, it never disappoints. I’m not a sci-fi person, but I stumbled upon this series accidentally. After watching 3 episodes I was hooked. Hooked as in I couldn’t stop binge watching it. Tatiana Maslany is a phenomenal actress in this not-your-average mystery show. I won’t tell you exactly what the premise of the show is because I don’t want to give away any of the bombshells revealed in the first episodes. I’m sad I’ve watched all the episodes currently available!

The Affair. You can find this Golden Globe Award winning show on Showtime. This drama explores the effects that an affair has on two different marriages. As the series progresses, it evolves in to much more, with an unsolved murder thrown in the mix. The show goes back and forth showing the same events from different points of view. It’s interesting to see how situations can be viewed and remembered differently from individual to individual.

Making A Murderer. You may be living under a rock if you haven’t yet heard of this Netflix series. Steven Avery, a man imprisoned for 18 years for a crime he didn’t commit, is back in prison for the murder of a young woman. The series, which was filmed over the course of 10 years, will leave you angry at the criminal justice system in this country, whether you believe he is innocent or guilty of the crime he is currently in jail for. This series is another one that I binge watched, making it a perfect show to watch for 20+ miles on a treadmill.

Limitless. Jennifer Carpenter, a former Women’s Running cover model, stars in this ABC series about Brian Finch, a man who takes a brain boosting drug called NZT. This show isn’t as serious as the others, so if you are the type of person who also likes to listen to music and half watch a show, then this is the one for you.

Quantico – I saw more commercials for this ABC series than I can count. I was never drawn in enough to watch it until I “ran out” of things to watch one day. I gave this one a whirl and ended up liking it. It’s set in my home state of Virginia at the FBI Academy in Quantico. Though the first episode felt a bit slow with more romance than I was looking for, it quickly improved. It ends with a terrorist attack, which leaves you unsure of who is trustworthy among the academy recruits.

Nothing on this list interest you? Check out this list I previously wrote that contains ten series not mentioned here!

3 Treadmill Workouts To Try When You Can’t Run Outside

Why Does Treadmill Running Feel Harder Than Outside?

The Upside of Treadmill Running