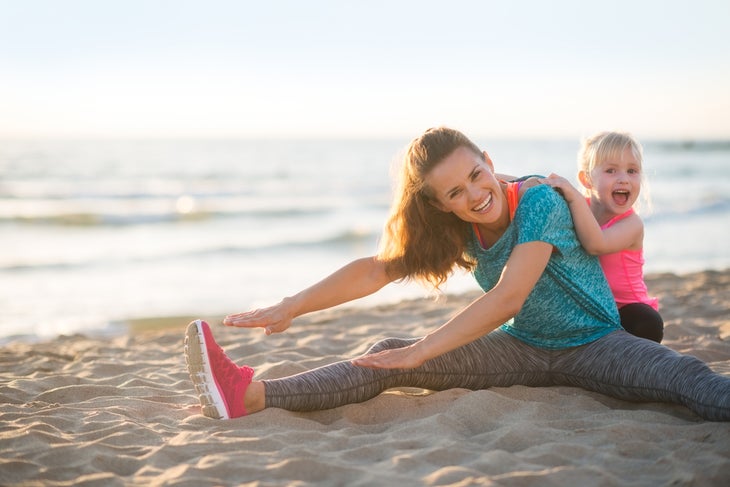 Ask any new mom what gives her anxiety and she might say hearing her baby wake up after a five minute nap or the thought of running out of coffee. But one of the worst offenders has to be the phrase “body after baby.” If you’ve had a baby, you know that it takes weeks (or months) before you’re even getting three consecutive hours of sleep, let alone getting your old body back. As time passes though, the baby weight will come off and you’ll start to resume your workouts. However, both your body and running routine will probably look different for a little while. There are some (lucky) ladies who do “bounce back” to look and feel the same as they used to, but this was not my experience. Oh no, it was not.

Before I got pregnant, I was a regular runner. During pregnancy I slowed down and eventually stopped as I got more and more uncomfortable. When I was cleared to exercise after I gave birth to my son, Charlie, I went out for a tentative jog around the neighborhood. Besides being somewhat out of shape, I immediately noticed how different the experience of running seemed to me (and not just because I was so sleep-deprived my eyes were half shut). Parts of me hurt more than I remembered. Parts of me jiggled more than I cared for. Not only did my body look different in the mirror, it felt different when I ran.  It was discouraging at first, but now, ten months after my son was born, I’m here to report that things are mostly back to normal. Here are three body issues that I struggled with as I returned to running and how I dealt with them:

Hips
One of my biggest complaints when I was pregnant (and I had many) was hip pain. Once I was in my second trimester, I developed sciatica—pain from a compressed nerve—in my hips. That pain, coupled with my loosening ligaments as I got closer to giving birth, made running uncomfortable enough that I eventually gave it up. Post-baby, the pain lingered for a while until I lost the weight and relieved the pressure on the nerve. It also took some time for my ligaments to firm up again, but with lots of stretching and yoga, I am now running pain-free. I also found that cross-training helped strengthen my hips and legs in different ways without the constant pounding that sometimes irritated me during runs.

Breasts
Of all the body parts that change when you have kids, your breasts may undergo the biggest transformation. They swell during pregnancy, get even bigger right after birth, and all hell breaks loose if you’re breastfeeding (you can easily go up another cup size after a nursing session). So needless to say, I quickly learned to have a variety of sports bras in different sizes on hand, depending on where my run fell into my nursing schedule. In the early days I sometimes doubled up and sported two bras for maximum support. Not my best look but a girl’s gotta do what a girl’s gotta do to protect the girls.

Core
After my baby arrived, my core was in terrible shape. It didn’t even deserve to be called a core. And since having a strong powerhouse is a very important part of being an efficient runner, I was acutely aware of how soft my middle was during those early jogs. The midsection arguably takes the biggest beating of all the body parts during pregnancy. Having strong abs again can seem like a very, very far off dream. But I was pleasantly surprised by how quickly my muscles developed again. No, not from all the planks I did in all my free time (ha). After a couple months of moderate workouts, as well as constantly picking up and lugging around my personal medicine ball (aka Charlie), my core got tighter and stronger. Running felt noticeably more effortless. I’m not exactly rocking a six-pack but I love that I can feel my abs working when I’m running now.

These were my personal issues with running post-baby, but some of my mom friends have complained about other problems, from urinary incontinence to having to replace their sneakers. (Feet often increase up to a size during pregnancy and remain that way.) But there are also a few positive ways having kids affects a runner’s body. Odds are your arms will be more toned than ever thanks to toting around your tot—not to mention the incredible burn you’ll get if you attempt a hilly run with a jogging stroller. Strong arms are a big part of propelling your body forward and balancing form. You’ll probably feel a new level of endurance during your runs too. If you were able to birth a tiny human and endure the borderline-tortuous early days of infancy, a three-mile run might feel like a walk through the park.

No two women will have identical experiences when it comes to running after baby; you may deal with the same issues I did or have a whole other set of aches and pains. The most important thing to remember is to ease back into it, listen to your body, and cut yourself some slack. Before you know it, you’ll be back to your old mileage and maybe even sleeping through the night again.