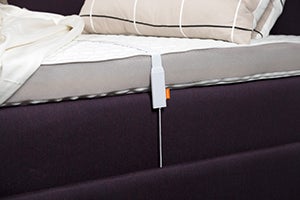 When it comes to sleep, I’ve discovered that seven hours is about my perfect amount. But that doesn’t always happen. Luckily, what I sacrifice in quantity, it seems I make up in quality. At least according to the Beddit Sleep Monitor Smart I’ve been testing.

The flexible sensor sticks to the mattress. It’s relatively thin, but I still put it under both the bottom sheet and the mattress pad. It works in conjunction with an app for sleep tracking without having to wear a device of any sort. Simply tap the “sleep” icon and it goes to work measuring heart rate, respiration, sleep quality, amount of sleep, how long it takes to fall asleep and more. When you wake up, touch the button again, and then instantly see feedback about your night.

While I may not get as much sleep as I should (or as consistently according to my monthly report), when I do sleep, it’s deep and restful. It even lets you know if you were snoring—I don’t.

The system works by sensing the vibrations caused through breathing, heartbeat and movements. A series of algorithms uses the vibrations to recognize stages of sleep, snoring, absences from bed and more. Testing in a sleep lab requires being attached to lots of sensors and monitors. While Beddit isn’t meant to replace sleep lab testing, it is helpful for athletes interested in tracking all areas of their health. Even better, Beddit tracks the information for you via an online account.

It also offers personalized healthy sleep tips and observations like: “Try to get up the same time every day,” “lots of variation in sleep time lately,” “very good sleep versus awake time and sleeping for less than six hours per night is not recommended.” Much of this is common sense, but seeing it presented in charts and graphs (I love graphs!) with numbers specific to me is rather powerful.

The bottom line is, I appreciate the beta and it’s easy to use. But as I’ve discovered, I’m a sound sleeper. For restless sleepers and those who move around a lot when they sleep, it’s completely possible to move off the sensor. In which case, you may not get an accurate sleep reading. Also, while setup is easy, the unit isn’t exactly meant to be portable. So, if you travel extensively and want your sleep data every day, this system has its limitations.

No, I don’t use it daily. But, I do use it a few times a week as snapshot of where I am physically. And also as a reminder to get more sleep.

The Must-Have Gear You Need to Get Started Snowshoeing

The Gear to Get You Started Ski Mountaineering

Supportive Science: The Quest to Build a Better Sports Bra