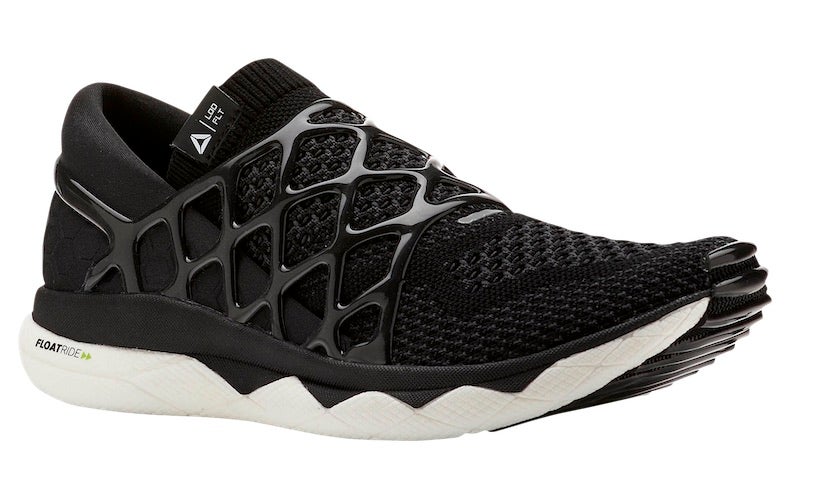 Reebok has just launched the Liquid Floatride Run, a fast, flexible and light shoe perfect for going for a PR in a 5K or a coffee run, thanks to its advanced engineering and stylish design. Made using the company’s Liquid Factory technique, the shoe is a whopping 20 percent lighter than last year’s Floatride.

The shoe features Liquid Lace, which is Reebok’s innovation of using a slip-on with stretch-to-fit properties instead of conventional laces. This makes for an easy on-off transition while still providing a snug fit. The other innovation on the Liquid Floatride Run is the introduction of Liquid Grip, which eschews the traditional rubber outsole—typically the heaviest part of a shoe—for stripes of “liquid,” providing a light outsole with excellent traction.

“Last year we launched the Liquid Factory concept with the Liquid Speed shoe. It was definitely a striking silhouette, as we aimed to showcase the way that the 3D drawing process could change the way shoes are made,” said Bill McInnis, head of Reebok Future. “What we’re excited to highlight with Liquid Floatride is how we can apply the Liquid Factory process to any of our existing products, to make great shoes even better.”

We asked if this shoe had any special features that would make it perform better for women. McInnis told Women’s Running, “In the past, we developed everything on a men’s size 9. We’ve recently shifted our approach, in the last year or so, in that we develop our new concepts on a women’s size 7 sample first, so now everything we make has to work for our women runner’s first and foremost. The cushioning, fit and arch support are all designed with women in mind. Creating the convenience of a slip-on shoe that you can actually run in was made possible with the Liquid Lace element.”

The limited-edition Liquid Floatride Run (priced at $180) is available now at Reebok.com.

Under Armour Releases The HOVR Phantom And HOVR Sonic

Do Running Shoes Cure or Cause Injuries?

Running Shoes are Part of an Environmental Crisis. Is Change Coming?