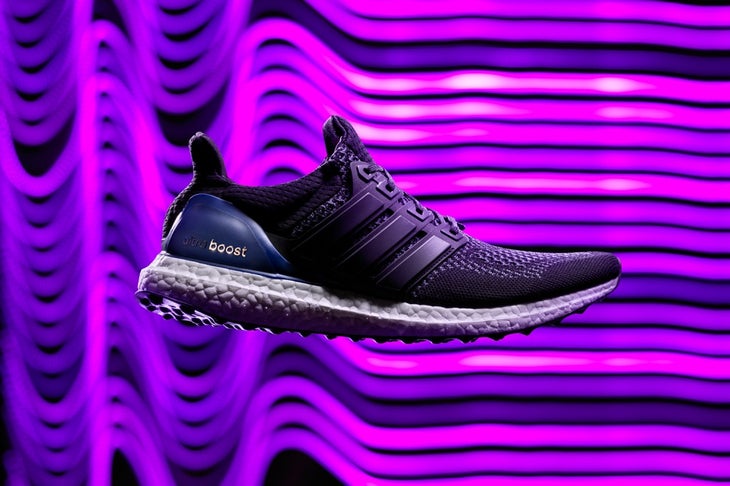 THE BEST RUNNING SHOE EVER

…at least that’s the claim of Adidas’s latest model, the Ultra Boost, which launched this week.

On Thursday, in lower Manhattan, hundreds of journalists from around the globe packed around a caution tape-lined runway at an Adidas press event. The lights went low, the smoke machines fired, music pumped from hidden speakers. So what was the big reveal?

Adidas launched what the company believes is the “greatest running shoe ever.” The show’s star: the Ultra Boost, retails for $180 and will be available to consumers on February 11. Is it best shoe ever? Too soon to tell. But after a preliminary wear test, we found them to be exceptionally comfortable. See what makes the Ultra Boost special, and decide for yourself whether this kick deserves to be king of the laces:

Adidas’s patented Boost foam marries the soft feel of a cushioned shoe without the smoosh-effect that slows your gate. The sole material is so responsive that a metal ball dropped on its surface bounces twice as high as it would on EVA. In fact, in a study performed by the University of Calgary, participants were able to decrease oxygen consumption by 1 percent when wearing Boost.

Released previously in the first iteration of the Boost this model includes 30% more of the good stuff.

The prime knit material hugs the foot. The tongue-less fit makes the model a little tricky to get on, but when you slip your foot inside, it feels cradled rather than laced-in. The stretch of the knit also allows for the natural expansion and movement of the toes and Achilles upon foot strike, thereby making landing more comfortable and potentially reducing risk of injury.

While the shoe has only been released in the black-navy colorway, more shades are on their way. We love the medal detailing on the heel cup and the lace tips. Fresh.

Even with the brand’s promise that the shoes will last—a $180 price tag is a tough pill to swallow. And some runners won’t be into the 10 mm drop. But still, we think these kicks are worth a wear test to see if your feet feel the Ultra Boost live up to the hype!

I Ran My Fastest 5K Ever in the Nike Pegasus 38