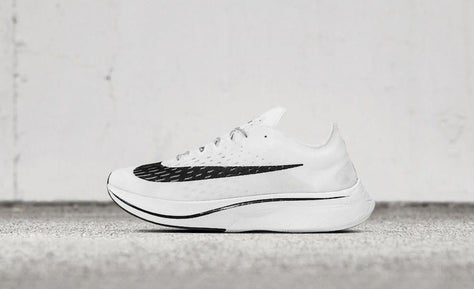 The Truth Behind The Shoe

If there was a resource you could use to immediately run four percent faster, would you buy it? Enter the Nike Zoom Vaporfly 4%. The shoe, as its name implies, promises to speed up your running performance by 4 percent.

According to Nike, the road racing shoe features ZoomX foam, an ultra-lightweight, soft cushioning that acts as a spring for the foot. The curved carbon fiber plate underneath provides a second lightweight layer that increases stiffness and serves to propel the foot faster. Four percent faster, according to Nike. That means that if you’re running a two-hour half marathon, simply trading out your shoes for the Vaporflys could improve your time by almost five minutes.

Maybe that is why so many elite runners have bought into the shoe. It was the shoe Eliud Kiphoge wore when he attempted to break two hours in the marathon last year. It also propelled Shalane Flanagan to her historic win in last year’s New York City Marathon. But is it equally advantageous for non-elite runners?

The New York Times published a recent study to test the advantage of the Vaporfly, using data from the fitness app Strava. The study concluded, “The analysis suggests that, in a race between marathoners of the same ability, a runner wearing Vaporflys would have a real advantage over a competitor not wearing them.” This advantage was consistent across race distances, training volume, gender and the speed of the runner.

The shoe, however, has also come with a fair amount of controversy. Many say that it presents an unfair advantage. Just like professional cycling has regulations regarding the weight of a bike and professional swimming has banned hi-tech speed suits, many suggest that the Vaporfly should be banned.

So, does the Vaporfly present an unfair advantage that isn’t available to a typical runner? The Vaporfly is the pioneer of speed shoes. Previously, we haven’t had to consider what makes a mass-market shoe legal or illegal in the sport. It certainly isn’t easy to find, though. After the prototype debuted in last year’s Breaking2 event, the Vaporfly was all the rage. Once it hit the shelves, it quickly sold out—despite the $250 price tag.

Next month, Nike is set to introduce an updated version: The Zoom Vaporfly 4% Flyknit. On October 4, it will become available to U.S. consumers from Nike and select retailers, as well as at the Bank of America Chicago Marathon Expo. According to Nike, the Flyknit update will switch out the lightweight mesh on the upper part of the shoe for a one-piece knit upper, which will “reduce irritation and improve breathability.”

The Vaporfly Flyknit is still expected to cost $250, and that’s if you can find it before it sells out. A quick Google search for pairs of Vaporfly 4% shoes (the model that came out last year and is currently sold out) that are on the secondary market reveals a modest selection of options ranging from $300 to $600. Since the shoe’s material is so lightweight and thin, don’t expect it to last very long, either. After a handful of races, you’ll need to cough up another $250 (or more) to buy another pair.

As you anticipate the coming buzz of the updated Vaporfly, consider what your convictions are on such a shoe. It won’t turn an average runner into a world record breaker, but it will boost your performance by a statistical amount. The question you should ask yourself is: If I can afford this shoe, do I want to buy it?