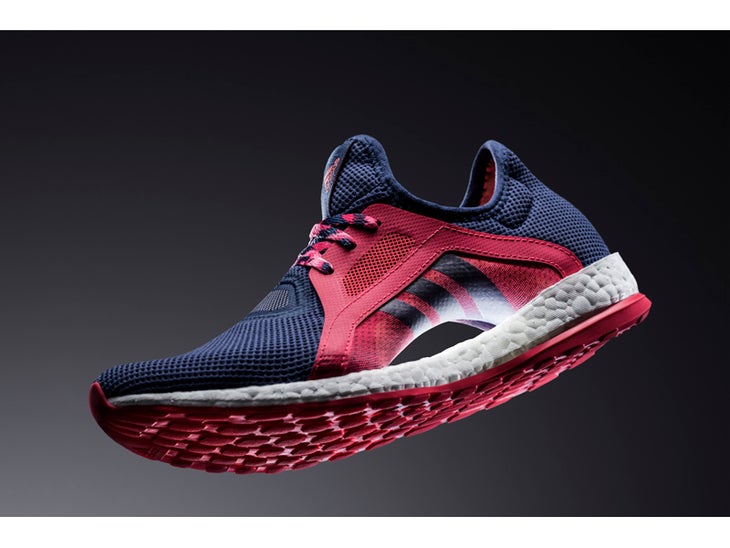 Athletic footwear design almost always starts with one thing: a man’s body. Traditionally, a brand would create the women’s version simply by switching up the colors and notching down the size (a.k.a. pinking and shrinking). More recently, fitness brands have started to change more than just the look and the length by modifying the structure in other areas as well—even still, the XY origin point is always the same.

But this week, adidas announced a running shoe that flips this design process on its head. The blueprint of the PureBoost X was built from the ground up, with females at the center of the story. “Women’s feet change and shift with every movement,” said Vice President of Training Kate Ridley at the adidas Women’s Summit in Los Angeles, where the shoe was first showcased publicly to a group of editors and influencers.

Thomas said the three-year process of designing the shoe began with the realization that “women runners want something that’s the ultimate combination between performance and style with absolutely no compromise.” She explained, “We needed to find inspiration for our design—and that inspiration was the female foot.”

The uniqueness of the PureBoost X’s design is obvious on first glance. The upper is formed from an adaptive stretch mesh that joins the shoe bed at the toe box and heel cup, but adheres the foot (instead of the sole) in the center. The intent is to adapt to the naturally shifting contours of a female foot in motion. Adidas calls this the “floating arch.” On the wearer it creates the sensation of a compression sock snugly hugging the midsole.

The foot bed boasts the brand’s proprietary Boost foam, popular for its superior energy return. The stretch web outsole has a tongue-free design that fits like a bootie. Laces provide an adaptable fit and a sweet aesthetic touch with a bold floral print.

Women’s Running had a chance to test the out-of-the-box design at the LA summit. The fit is a bit jarring at first: Is this a sock or a shoe? But after a few minutes, your mind relaxes and your foot adjusts to the snug-but-comfortable fit. The sole is a bit less substantial than that of the brand’s Boost flagship, the adidas Energy Boost, but still allows for a nice, springy feel. The flexible structure promotes a natural stride that may take some getting used to if minimal isn’t your go-to style. Adidas suggests easing into higher mileage runs.

If you’re up for trying something new, the PureBoost X will be available online and in store in three colorways on Feb. 1 for $120. More style-conscious, spendy shoppers can wait until Feb. 15 when the two Stella McCartney versions will go on sale for $170.