*Kristin’s individual reviews of the Adidas Vengeful and Supernova Sequence 9 were first posted on RunningShoesGuru.com. 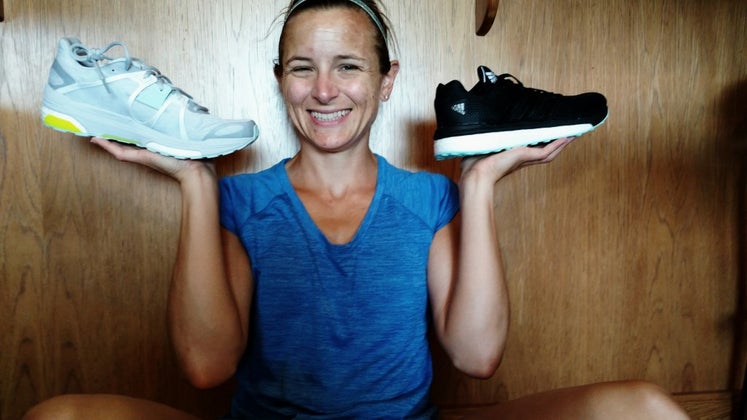 Honestly, when I first walked around with one of each per foot, I forgot that I was wearing two different shoes! Since they have the same midsole boost foam and a similar outsole pattern, I’ll give you a quick run through of comparisons and differences that I found when running in them, with links to my more extensive reviews of each on runningshoesguru.com, so that you can decide what is best for you.

First, the boost midsole foam IS AMAZING. This foam offers a superb blend of cushion and responsiveness: it’s soft but springy, too! Long trials done on the foam show it to hold up well after hundreds of miles. Adidas offers a breakthrough technology as the brand has added thousands of small pebbles of TPU (thermoplastic polyurethane) in the midsoles of their shoes, underneath the midsoles’ STABLEFRAME technology, which is a thinner layer of EVA along the lateral side of the shoe with a solid plank of EVA along the medial edge. (Interesting, side note—this TPU is currently in the dashboards of BMW automobiles!) The STABLEFRAME aspect of the midsole gives both models of shoe a moderately stable ride; I feel as though my foot is supported throughout the heel-toe transition and both have a solid (yet springy) feel in the forefoot of the shoes.

The difference is that the Sequence 9 also has a plastic piece in the inside section of the heel that aids in stability and arch support, especially on longer runs. The Sequence 9 also has an overlay over its upper that is split up per shoelace hole, to allow for a customized lock-down of the upper; it stays snug no matter how long the run while the Vengeful loosens as the run nears double digits.

The adidas Sequence 9 has a remarkably similar ride to the ASICS Gel-Kayano 22 regarding stability and a snug feel in the midfoot. The toe box is molded about 1/8” higher, however, and it has about 3 mm. longer of room in the toe box. So if you like the Kayano except for the toe box, definitely give this shoe a try. I enjoy the Vengeful (besides the name) for shorter, faster runs. This shoe fits the bill for what I think a neutral running shoe should be: it offers cushion and a little stability without going all-out in either direction.

If you’d like more information (and more pictures!) about either, definitely check out the links to the runningshoesguru.com reviews, but if you haven’t given adidas running shoes a look, I think it’s time!

8 Running Brands that Actually Give a Damn About the Planet