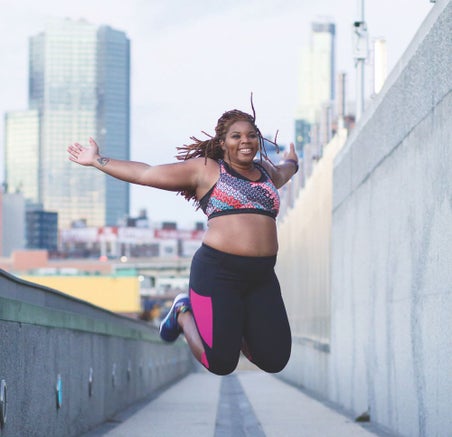 For many runners, a proper fit is no guarantee.

There is an old-school way of thinking that just because you are thin you are healthy. Research has shown that people who are overweight, yet fit, are not at a higher risk for health complications, such as heart disease. Even still, many people hold on to the notion of size equating to overall well-being—and Latoya Shauntay Snell is living proof that size doesn’t tell the whole story.

“Sometimes I feel like a circus act in the gym,” explains the plus-sized athlete, freelance photographer, chef and blogger at Running Fat Chef. “Now that I’ve been going, they see me on a regular basis, so I don’t get it as often, but I do notice that people actually stare a lot. People give me what I like to call ‘backhanded compliments,’ saying, ‘Wow, I can’t believe you can actually jump that high.’ It surely can offend someone when you stop them in the middle of their workout!”

Snell notes that it isn’t only her fitness routines that receive comments, but her clothing choices as well. The 218-pound runner hears things most often when she wears leggings. “I find it happening more from other women,” she adds. “It’s kind of disheartening when you’re walking down the block and you realize that another woman is making mooing noises or commenting on what made you ‘walk out of the house like that.’ You overhear it and then it’s to a point where I wear headphones—even when I don’t have music on—just so I can pretend I don’t hear it.”

Related: An Athena Runner Breaks Down Her Search For Apparel That Fits

Look In The Mirror

How did we get here? Somewhere along the way, a large chunk of the fashion industry decided that certain outfit options should be worn only by the stick-thin—and the same goes for workout clothing.

This concept is wrongheaded, of course, but what makes it all the more confounding is that according to the Centers for Disease Control and Prevention, the average adult American woman weighs 166 pounds, stands at 5 feet 3 inches and has a 37.5-inch waist. That’s a size L or XL and anywhere from size 14 to 16 in most stores. This means the average woman is what the industry calls “plus-sized.” This term is as loose as it is problematic: some brands say “plus” starts at size 12 and up, some reference it starting at size 16 and, apparently in high fashion, it can begin at size 8. The average woman has become a minority by industry standards.

That is part of the problem, yes, but another is the approach brands take when making and marketing clothes to curvier women.

Last year, many fashion brands, including Forever 21, took some heat on social media for charging more for plus-sizes; and in 2014, Old Navy faced a petition on Change.org for the price discrepancies (its plus-sizes jeans still run about $15 more for the same style). The company responded that creating plus-sizes includes extra design features to enhance curves, accounting for the increase in cost. “It’s priced differently because it is different,” the statement read. “We invest more in our product, and we’re proud of what we deliver.” Renee Posey, the customer who started the petition, wasn’t satisfied with that answer, unable to believe that the smaller sizes didn’t include similar “figure-enhancing elements.” The petition wasn’t only created because plus-sized clothing costs more for women—but because plus-sized clothing at the store doesn’t cost more for men. This is the case with most brands.

This discrepancy extends into marketing practices; however, it is harder to identify. As a freelance photographer in the industry, Snell points out that “you have to figure out if we’re actually looking at what we’re looking at.” She recalls an exchange with a model who was working for a brand (Snell declined to share the name)—at a size 10, she was modeling plus-sized clothes.

“The model said they put her in clothing magazines that tailor to a size 14 or 16, and they pad down her hips, accentuate her breasts a little bit, and there she is—she has an hourglass frame,” she says. “It’s insane.”

When it comes to fitness apparel, many women have felt ignored by the major brands—instead they shop at traditional retailers such as Kohl’s and Target for workout apparel that fits. Brands like JunoActive and Happy Puppies emerged in 2012 and 2014 respectively, catering to larger (aka average!) women. Slowly, companies, such as Nike and Brooks have followed suit, creating plus-size options and extended sizes.

“Women are stronger, bolder and more outspoken than ever, and in today’s world, sport is no longer something that she does—it’s who she is,” shares Jenna Golden, Nike’s North America communications manager. There is a frankness now about body image more than ever. Social media is partially to thank, as well as the women who have stood up and advocated for more—more respect, more recognition and more options. Brands are taking note.

However, when you look at the innovations in fitness apparel and gear that companies have made over the past years, a lot of what has made waves has really been geared toward supporting professional athletes in reaching their goals. From sponsorship deals that dominate apparel at the Olympics to Nike’s Breaking2 initiative, it can feel as if what brands have been doing is creating for the elites and then tweaking it for the rest of us. It gives everyday women a preconceived notion about what an athlete should look like in apparel and in the sphere of competition.

Women’s apparel company Oiselle is recognized for its drive to clothe athletes—recently dismissing the athleisure trend altogether. The brand is known for being vocal when it comes to empowering women—but a company for whom inclusion is central still faces challenges in catering to and providing support for all sizes. Historically, the brand’s offerings have stopped at size 12.

“It is true we are designing size 14 in key styles for spring 2018 and beyond,” shares Oiselle’s design team. “Most brands recognize size 14 as plus-size, but typically it goes up from there. Lane Bryant, for example [one of the largest plus-size apparel makers], starts at 14 and goes up to size 24. Oiselle does not currently have plans to go beyond size 14 but won’t rule it out for the future.”

Apparel giant Nike has also expanded its line after recognizing it did not do enough to meet the diversity of women’s bodies. “We have offered plus-size products for the past decade, but the range was not broad enough to cover all consumers,” shares Golden. “We continue to listen to the voice of the athlete and have built out the plus-size line to offer more premium products and sizes that fit women’s needs. The line now includes more options in sizes 1X through 3X, but more than size, Nike products are crafted specifically to fit and flatter the female form, whatever the size.”

Other apparel companies such as Brooks offer XL and XXL options (fitting sizes 16 to 22) for many of their clothes. Brooks has also expanded offerings in terms of shorts with inseams ranging from 3 to 7 inches, acknowledging that “standard” running short inseams don’t work for every size runner.

It is imperative for runners to keep speaking out about their bodies. This is not just to get more diversity in apparel, but so other women new to the sport can see that every body is a runner’s body, no matter the shape.

What My Pear-Shaped Body Taught Me About Apparel

Women Share Their Experiences Being Plus-Sized In A Running World

What A Plus-Size Athlete Wants–Options!