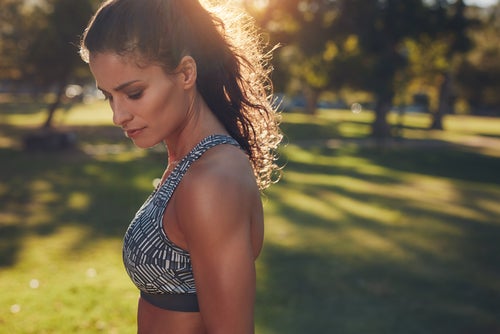 I don’t know about you, but since this trend of removeable sports bra pad inserts became the norm, I have a drawer filled with dislodged pads from the washing machine! Sports bra pad inserts either bunch up, fall out or move while putting the bra on, running or removing it.

Where did this trend start? Why does it continue? And what opinion do most women have about them? Let’s find out…

Related: How To Find A Sports Bra With The Proper Fit

The Birth Of The Removeable Pad

Women everywhere rejoiced with the invention of the sports bra in 1975, first commercially available and known as the “Free Swing Tennis Bra” and introduced by Glamorise Foundations, Inc. The first general exercise bra, initially called a “jockbra,” was invented in 1977 by Lisa Lindahl and theater costume designer Polly Smith with the help of Smith’s assistant, Hinda Schreiber.

Since then, things have grown tremendously when it comes to sports bras. With extreme sizing available on both ends of the spectrum, there is a sports bra for many body types, which is a great thing (Although we think there’s still a ways to go.). A not-so-great thing is the invention of removable pads, depending on what your needs are and how you feel about presenting yourself in public when wearing your sports bra.

There seems to be two basic reasons for these padded intruders, which made their way into the mainstream in the early 2000s:

At least you can easily take most of them out. Some pads are sewn into the liner of the bra and, when they inevitably get bunched up, it’s much harder to flatten them to their original position. I’ve been known to take a pair of scissors and cut them out.

The pads do cover up pointy nipples quite nicely; if you’re already apprehensive running with just a sports bra on because of that reason, this may go a long way in boosting confidence.

For those who have smaller breasts, they are good for adding shape when you’re out running, if that’s something you desire.

The pads end up getting bunched, scrunched or simply fall out. Sometimes only one falls out. Pretty soon you may have so many pads of various shapes and sizes, and, not knowing which pad goes with which bra, you find yourself playing a version of the match game we all play with socks to sort it all out. Except this one is a little more weird.

Why is seeing a woman’s nipples coming through a bra so bad anyway? We do have nipples, and they tend to protrude when active. Having the pads may make some of us feel more comfortable or less fearful of uninvited attention while running, which is always a good thing. I think.

Obviously women are pretty vocal when it comes to their opinion on the removeable pad debate. I found this thread on Reddit, which sums up both sides quite nicely:

“I don’t have a huge reason to have high impact sports bras so most of mine are medium impact. The medium impact ones all seem to come with removable padding. For the life of me, I don’t know why they’re made like that but whatever. Every time I wash them, the padding either shifts or straight up falls out. I’ve lost the use of more than one bra because one side of the padding has come out. I’ve thought about sewing the small sides shut, but the padding inside would be ‘free floating’ and I wouldn’t be able to fix it when it shifts. I don’t want to sew them in place and ruin the entire look of the bra.” –sweattosuccess

“I always remove the padding, throw it in the trash, and just let my nips flap in the wind. I hate dealing with the padding.” –anonymous

“Man my boobs look way too small in those. At least the padding gives me some sort of boobage!” –jaide_b

“Yes yes yes. To each their own, but I absolutely loathe padding and am really confused why so many women seem to fear even the slightest hint of visible nipple outline. Can anyone give me some insight here? I feel like I’m totally misunderstanding a large segment of my own group!” –anonymous

“As dumb as it is, in American society boobs are sexualized. If you show someone boobs they most likely don’t immediately jump to thoughts of a mother nursing a child; the vast majority of the time the thoughts will be sexual. I don’t want that part of me to be sexual when I am at the gym (or most places, actually). I would wear the tightest bra that squished them down to nothing if it weren’t so restrictive. If it were a thing, I would take my boobs off and leave them at home…haha So it’s kind of about controlling the nips because that reduces the sexualization when I already feel like I am in an exposed and vulnerable situation.” –actuallyanengineer

How do you feel about removable pads in sports bras? Tweet us @womensrunning with the hashtag #removablepads.

9 Pieces of Running Gear We’ve Been Wearing to Work (and Brunch, Too)