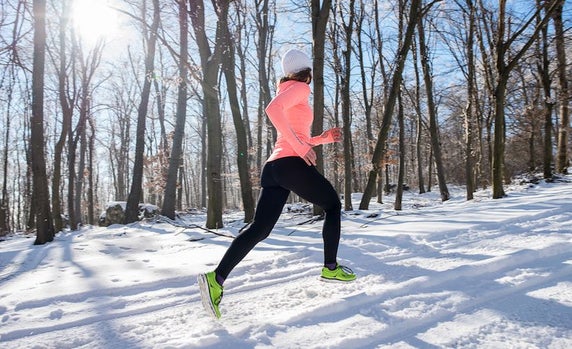 Race Lesson Learned: When traveling to a race, ALWAYS pack more than one race-day outfit.

We were two months into our first “Chicago winter.” I wish I could say that I was thriving in my new environment, embracing the sub-zero windchill temperatures and bone-chilling wind. But a more accurate depiction would be that I was barely surviving. It didn’t help that we had just moved to Chicago from Phoenix, where winter temperatures hover in the 40- to 50-degree range. My Phoenix winter “thermal” gear afforded me absolutely no protection against the arctic temperatures in my new home.

Since I absolutely abhor running on a treadmill, I made a pact with a fellow Chicago runner to run at least 1 mile outside every day of the winter. To further hold myself accountable, I invested in proper winter running gear: Smartwool thermal tops, insulated running tights, a headband, knee high Smartwool socks, neck gaiter, thermal mittens and gloves, and a waterproof/windproof running jacket. I was all set–or so I thought. Even after bundling myself in every layer I owned, I’d return from runs with semi-frost-bitten toes, wind-burned thighs and a frozen face, like a Botox procedure gone incredibly wrong.

So when Matt suggested that we travel somewhere warm for a winter destination half marathon, I immediately agreed. I could already envision the palm trees, feel my toes in the sand and smell the ocean breeze. You can imagine how shocked I was to discover that Matt’s “perfect” race was in Jackson, Miss.!

It took a while, but he eventually convinced me that this would be a great race. Neither of us had been to Mississippi, so we were excited to explore a new state. Jackson was also projecting to have temperatures in the 30s on race morning, which seemed balmy compared to the -20 windchill we’d become accustomed to. Packing for the race, Matt became slightly over-zealous. He was running in Chicago in tights and a long sleeve–surely his shorts and race tank would suffice for Jackson. I opted for capris and a long sleeve, throwing in gloves and a thermal headband for good measure.

However, when we arrived in Jackson, we quickly realized that 30 degrees is still quite frigid. Matt immediately regretted his choice in race attire. Luckily for him, the race expo was selling past-season discounted running apparel, so he snagged a long sleeve technical tee and a pair of cotton gloves.

It was pitch black as our alarms sounded on race morning. As we ate our pre-race breakfasts, we watched the local news. A reporter was broadcasting from the start line of the race, proclaiming that temperatures were in the low 20s–a record low for Jackson!

Our fingers and toes were already frozen before we finished the half-mile jog to the start. Despite my attempt to warm up with dynamic stretches, I was having difficulty even feeling my toes! How in the world would I be able to run!? Why didn’t I pack my Smartwool socks?!

Fortunately, as the sun began to rise, so did the temperature. By the time the race started, it was almost 30 degrees. As I listened to other local runners complain about the cold temperatures, I had a realization. I knew that we’d been conditioning ourselves to run in much colder temperatures; if we could run in Chicago, we could run here.

That’s exactly what we did. Despite our frozen fingers, legs and toes, Matt and I soared through the rolling hills of Jackson. Perhaps by living in Chicago, our bodies were already adapted to the climate, and instinct simply took over. Or perhaps we subconsciously ran faster to escape the cold. Whatever the reason, Matt and I both dominated the race. Matt placed third overall, and I placed third in my age group, with a 2-minute PR of 1:42:00.

I will never forget this race. It was the first time Matt and I raced together and both did well. Just as importantly, it will always serve as a reminder to pack several race-day outfit options!

Above Or Below Freezing: What To Wear On Winter Runs

6 Simple Tricks To Get Psyched For Winter Running

Race Tip: Don’t Take A Red-Eye 3 Hours Before A Race