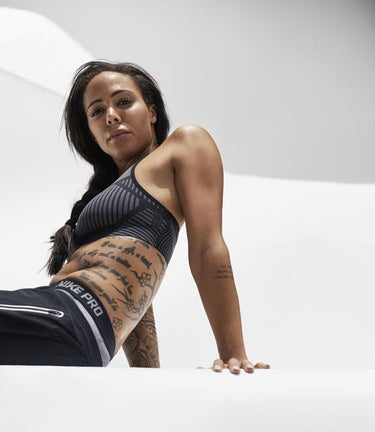 The Flyknit technology that has been Nike’s claim to fame with their popular shoes has now been adapted for the company’s line of sports bras. Starting today, the Nike FE/NOM Flyknit Bra is available through Nike+ exclusively for 48 hours. Following the two-day window, the bra will be available at Nike retailers and on nike.com starting Friday.

Nike first introduced Flyknit technology in 2012 with shoes that weighed as much as 19 percent less than the shoes worn by top marathon finishers in the 2011 World Championships. In addition to weighing less, the yarn and fabric weave of the shoes was meant to lend flexibility and breathability to the feet wearing them. This was intended to give the shoe a natural feel without eliminating too much of its necessary support.

The Flyknit Bra was designed with similar goals in mind. Most important was to produce a sports bra that had sufficient support with as little material waste as possible. The Flyknit looks like a traditional sports bra. However, it is actually 30 percent lighter than all of the others in Nike’s high-impact line. In doing away with the wires and pads that are involved in the making of several other high-impact sports bras, Nike has created a seamless option that is smooth, flexible and offers full coverage. Even with its lighter weight, the bra was designed for high-impact activities like running. Does this mean we might soon be able to trade our thick, heavy sports bras for featherweight versions with the same support? Maybe.

The Nike Apple Watch Is Sleek And Your Next Favorite Thing

3 Important Mindset Shifts I Learned From Training in Ethiopia

Help us Put Your Old Sneakers to Good Use

Here’s What To Know About Recycling Your Running Shoes