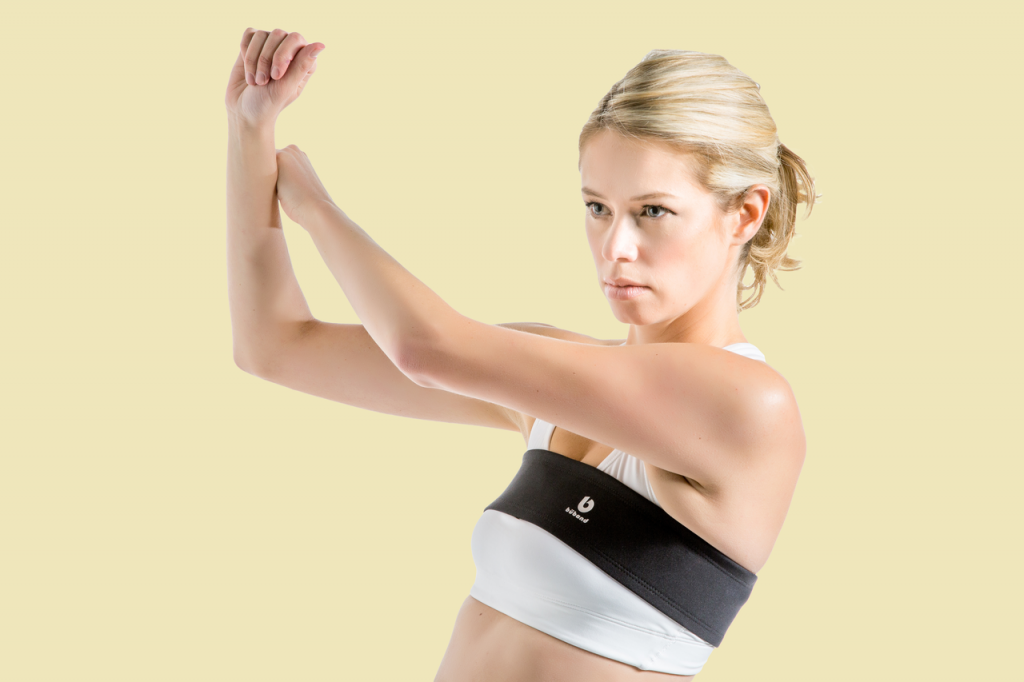 No matter how much time you invest in finding that perfect sports bra, according to some statistics, 80% of women wear the wrong size. For women with larger breasts, finding a sports bra that offers optimal support can be a whole other issue and sometimes two sports bras need to be worn. It was that very problem that led Lynne Koziey to create Būband.

“Like many women, I struggled to find a sports bra that would provide the support I required and often wore two bras at once in a bid to beat the bounce; I developed with Būband with change in mind,” she explains. “I wanted to offer women a product that really worked and that was completely different from what currently exists on the market.”

The product she created is an athletic band that is worn over a sports bra to reduce bounce when exercising. To put it on, you start with the band over your stomach and fasten the hook and eye closure at your front. You then spin the band around so the hook and eye system is on your back and bring the band up. It should be worn across the top of your breasts.

The extra support runners and athletes get from the Būband is not just for comfort—it is also for your health. Koziey notes a study in the British Journal of Sports Medicine that looked at 1,400 female marathon runners and found that almost two-thirds suffered breast pain while running, despite the fact that 90 percent were wearing a sports bra.

“Not only did researchers find that better forms of support were required, but the other issue women face when their breasts are poorly supported is the stretching of the Cooper’s Ligaments, which a largely responsible for preventing breast sagging,” Koziey notes. “While sagging occurs naturally with age, it is believed that the process is expedited by poor breast support.”

Koziey tested many types of fabric to find the perfect one that promoted both support and comfort, making sure it was a high-performance fabric that was breathable and fast-drying but also smooth and soft to avoid chafing. After prototype tests with real women in a variety of high-impact sports, such as running, tennis and soccer, the final product is made of a mix of Spandex and Supplex to offer a soft, cotton-like feel with advanced fiber technology.

The key to the Būband is making sure you get the right size—five sizes are offered—and note that the band fits differently than a bra. The company provides a sizing chart and measuring instructions so you make sure you get the perfect fit.

“For many women, a sports bra alone fails to provide the support they require, so adding the Būband over the sports bra provides that extra layer of support, preventing the pain and discomfort they may have experienced without it,” Koziey adds. “The Būband employs the simplest of concepts to provide maximum performance and comfort: hold the breasts down, don’t lift them up. It’s Physics 101.”

Read More:
Is It OK To Not Wear A Sports Bra During A Workout?
There’s A Reason Why Many Sports Bras Still Suck

How To Find Your Perfect Sports Bra Fit