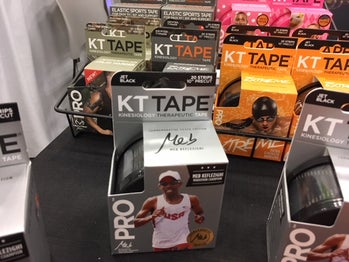 In recognition of Meb Keflezighi’s recent retirement after his 26th and final marathon in New York earlier this fall, KT Tape released new products endorsed by Meb, including this PRO Meb pack. Keflezighi was circulating the trade show floor throughout the event, spending time at the ElliptiGO, Sketchers and KT Tape booths after he received the TRE Lifetime Achievement Award on November 30. 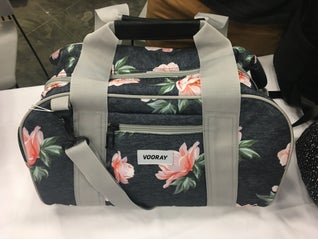 The gym bags and duffel bags from Vooray caught our eyes at the TRE trade show. The Burner Gym Duffel is made with leather magnetic handles, a high-quality polyester fabric and ventilation holes in the shoe pocket, and is sold at an accessible price point. Vooray has been capitalizing on the athleisure trend, having been in yoga studios and gym chains previously, but over the last eight months it’s been making its way into the running scene.

These new shoes quickly caught our attention as we approached the BOA booth. Made using the BOA System (a unique lacing strategy that allows wearers to easily tighten their shoes as needed by twisting a knob near the tongue), shoes with this feature can be used for hiking, snowboarding, triathlons…and, of course, running. With the ability to quickly tighten and release the lacing before, during or after exercise, these shoes show promise for delivering the personalized fit that all runners desire. 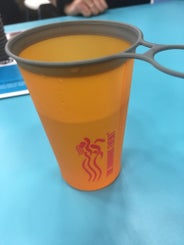 Originally invented to help runners stay hydrated on race courses that don’t endorse the use of paper cups, the Hydrapak SpeedCup is made of lightweight, flexible material that can easily scrunch up to fit in your pocket while empty. Though the SpeedCups are traditionally sold in packs of four, HydraPak was distributing special TRE-branded cups at the trade show. 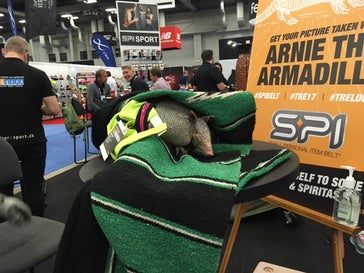 This little guy served as TRE’s mascot–and, though he seemed pretty nervous about the number of people constantly crowding in his personal space to get a better look, he definitely makes our list as one of the best running-related mascots we’ve seen yet. (Don’t worry, Hero the Hedgehog; we still love you.)