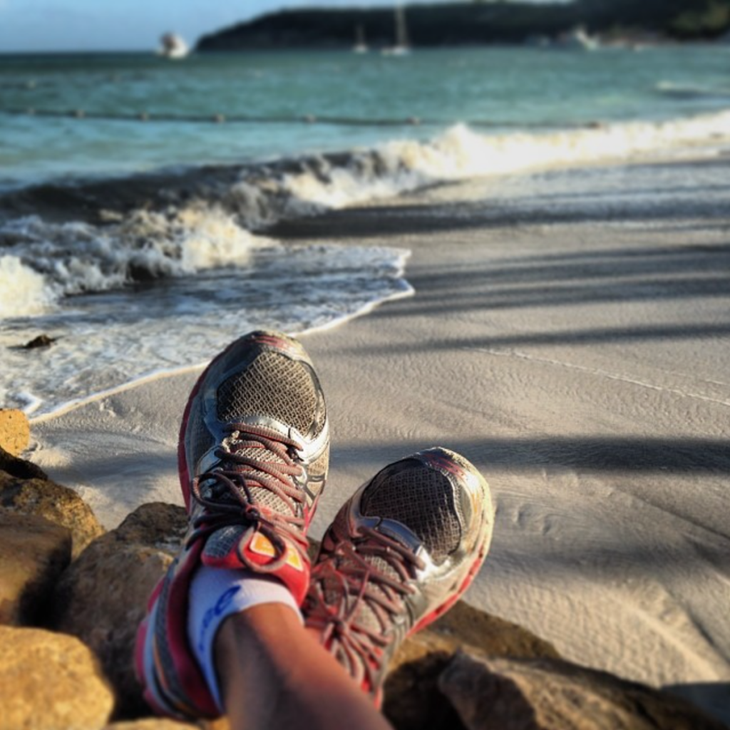 In my childhood days growing up on the Caribbean Island of Dominica—the Nature Island—all sports shoes were referred to as tennis shoes—or “tenny-shooz,” rather. That meant you walked, ran, hiked, played netball, basketball and every other type of ball in that one, all-purpose pair of tenny-shooz. Unsurprisingly, the concept of being properly fitted for running shoes was quite foreign to me. In fact, it wasn’t until my late 20s, when I had finished my first 10K that I decided to put aside the tenny-shooz—two-year-old cross-trainers, in this case—and invested in shoes actually meant for running.

And so, while I was on a work trip to Boston, I went to a specialty store, ran on the treadmill as the store assistant watched and mulled over my pronation, and obediently bought the pair of Brooks that he suggested. Yet for the 4 months that I used those shoes, my runs would end with a strange, shooting pain in my hips that persisted for days post-run. Rest made little difference, so being the hypochondriac that I am, I decided to see an orthopedic physician. She took x-rays, contorted my legs left and right and concluded, “No structural damage…but I’ll have you do some PT.”

It was that physical therapist—bless his soul—who determined that the shoes I was running in were completely wrong for my pronation. Somehow my very neutral gait had been interpreted as hyper pronation at the specialty store. I thought back to my prior months of pain. I was fuming. It was after that unfortunate experience that I was introduced to an ASICS shoe. This time I did my fitting at a running store in Brooklyn, my neighborhood at the time. I had been inside once or twice to buy some neon-colored socks here, flashy running tights there, but my first “real” purchase at that store were my ASICS. And it was so worth it.

Related: A Love Letter To Your Favorite Black Leggings

The store assistant watched me run…and I held my breath, suppressing the alarm bells starting to sound in my head. Without any hint from me about my previous running-shoe-fitting disaster, he immediately and correctly assessed me as having neutral pronation. His recommendation was the hottest-selling neutral shoe at the store: the ASICS Gel-Nimbus 12.

I liked the feel of this shoe, the blue and silver color palette and the unusual diagonal lacing—which surely had more benefit than just aesthetics! But it was when I ran outside and I felt like I was running on marshmallows—without the sticky feel, of course—that I knew this was the start of something special. In the following days, after my hips felt, well, just fine, I was hooked. Fast forward five years, three marathons, six half marathons and thousands of training miles and my Gel Nimbuses have been there every step.

Run DMC’s ode to tenny-shooz was forever codified in their rap song, “My Adidas.” As I get ready to replace my current pair after the Kingston City Run Half Marathon in Jamaica that was on March 13, I thought it only fitting (pun intended) to borrow from Run DMC…

we make a mean team, my Gel Nimbus and me
we run around together, run forever
and we won’t be mad when worn in bad weather
My Gel Nimbus…

What tenny-shooz do you run in?

Janelle Prevost is a consummate corporate career woman and sometimes health enthusiast (except when there is a bag of Cheetos in sight). She enjoys sharing her stories of running trials and triumphs.