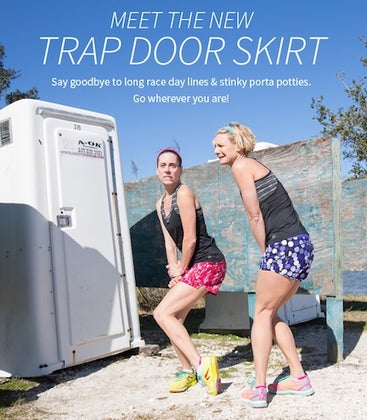 What makes jokes funny is when they hit close to home. This past April Fool’s Day, Nicole DeBoom, founder of Skirt Sports, sent out a funny email announcing a Trap Door Skirt to make on-the-go pit stops easier, and the feedback she got was insane. Given that one in three women have exercise-induced incontinence and just about everyone has a running/bathroom/emergency story, her joke uncovered a need.

“Women have been asking me to design products that can easily fit a pad or make going to the bathroom more convenient,” DeBoom says. “After the response from my April Fool’s Day joke, we literally heard from thousands of women, I decided I had to do it!”

And like that, the “Gotta Go” project was launched.

Related: This Product Will Save You Some Embarrassment

Using their popular Gym Girl Ultra Skirt as a starting point, Skirt Sports made two prototypes: one with a more modest relief hatch, and one more open. After testing, they determined the more open and easy-flow option was the best choice.

“I’m totally serious. We are literally talking about crotches and finding ways to analyze and measure certain areas, areas that aren’t usually analyzed,” says DeBoom. “We’re getting up close and personal!”

Basically, it’s a running skirt with a trap door (held in place by low-profile Velcro) and a relief hatch—or an open space in the crotch.

“No more flashing the world or losing time doing the struggle dance to get a skirt back on over your sweaty ass,” says DeBoom.

The Gotta Go has 5″ boy briefs, kick pleats in the skirt (for maximum mobility), two leg pockets and one back zip pocket (perfect for an extra tampon or pad).

Skirt Sports turned to Kickstarter as a way to overcome the costs inherent in creating a new product, costs that can often be a deterrent to innovation.

“We got our first 100+ backers in the first couple days and realized that people from around the world are finding us, which is really cool,” says DeBoom, who is free flowing with pee puns. “Apparently the women Down Under are hankering for a quick pee opportunity—or maybe they’re looking for other ‘easy access’ uses?!”

Go here to check out the campaign.