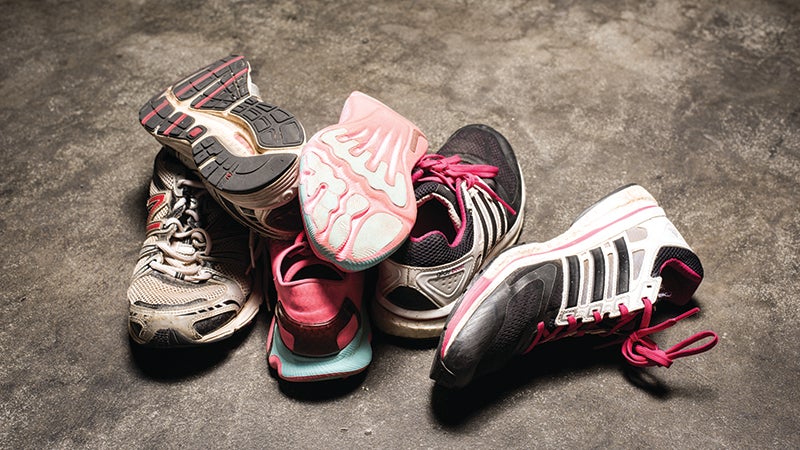 Running shoes don’t last forever, but you can’t necessarily follow the old adage that each pair will last 400 miles either. Running in old shoes can result in a variety of ailments as the shoe’s cushioning and structure breaks down, or trauma-related injuries (such as a bone bruise under the metatarsal heads) as the outsole wears thin.

1. The tread is showing significant wear in one or more sections of the outsole.

Once you’ve burned through the outer layer of rubber to the point there is no tread or where you can see the next layer of material, it’s time to get new shoes. (The wear-pattern is also an indication of your gait pattern, so if there is considerable wear on one side and little sign of wear on another, it could indicate that you’re imbalanced.)

2. The footbed (aka the sockliner) of your shoes is frayed or worn thin in a certain area.

Most footbeds are rather flimsy and the friction caused from every footstrike will wear away the soft foam and thin layer of fabric over time. Damage to the footbed can result in a change in how the shoe fits, which can lead to slippage, blisters and hot spots during a run.

3. The midsole of the shoe no longer looks the same or absorbs impact the way it used to.

You might notice this by feel, by sight or by manual manipulation. The bottom line is that the foam and plastic components in a midsole tend to get packed out and lose their resilience after a few hundred miles, resulting in a “dead” feeling underfoot, a deformed appearance or a shoe that’s entirely too pliable compared to what it used to be.

4. The shoe’s upper or laces are showing significant signs of wear.

Materials used to build uppers are much more durable than they used to be—it’s doubtful you’ll be poking a hole through the end of the toe box. Normally, standard laces should outlast the life of your running shoes. So if your laces are stretched, frayed or you can’t seem to get them tight enough, it might be a good indication that you’ve run the life out of your shoes.

How to Choose a Trail Shoe

The Best Reflective Gear For Running After Dark

These 9 Sandals Will Save Your Feet this Summer